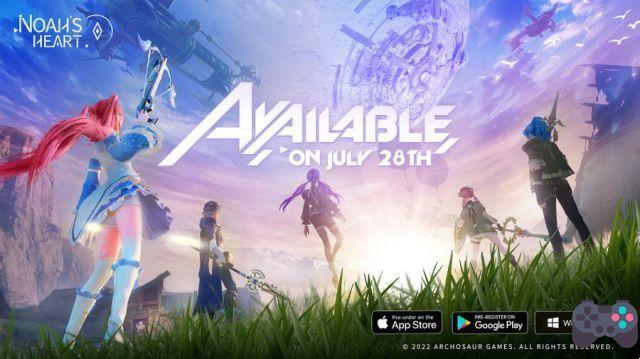 Noah's Heart has finally been released. Developed by the same producer of Dragon Raja, Archosaur Games, this game is an open world RPG with beautiful graphics and is available in Spanish.

The game first appeared in 2020, and the first beta test only started in 2021 in China. The launch took a while to happen in the west. Just this week the game arrived globally for Android and iOS.

The inevitable comparisons to Genshin Impact

It's no use, any open world RPG with green fields will be compared to Mihoyo's game. Especially if the game in question is graphically beautiful and quite heavy. This is the case with Noah's Heart.

Noah's Hear was developed using Unreal Engine 4 and features the most impressive features of the mobile version of that engine.

But Noah's Heart isn't exactly a contender for Genshin Impact. That's because the gameplay is essentially different.

Noah's Heart is an MMORPG that has those aids that we hate like auto-battle and auto-navi.

In addition to versions for Android and iOS, Noah's Heart will also have a PC version and crossplay between platforms.

Noah's Heart is a pretty heavy game and it's sure to be a reason for discussion for a lot of people.

You can reserve at least 10 GB of free space on your phone there. Currently the game “weighs” 9 GB.

Noah's Heart, open world game is in early access in Spain (and in Spanish) ❯

add a comment of Noah's Heart Launches Globally for Mobile