Ni no Kuni: Cross Worlds is now available for download on Google Play and App Store

The long awaited MMORPG Ni no Kuni: Cross Worlds it's already available for download na Google Play e App Store. But hey! This is just the pre-download. You game servers will only open tomorrow, the 25th. 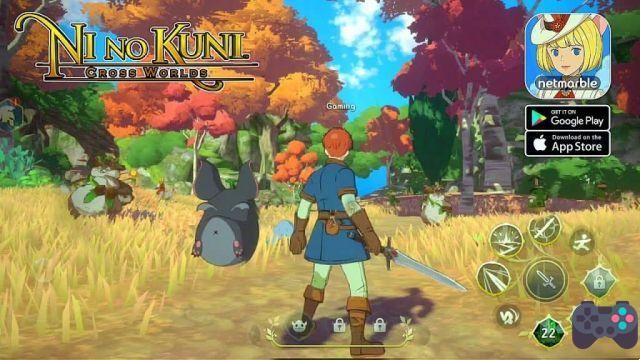 When downloading the open world MMORPG, it will ask you to download about 3GB of data. Once again, Netmarble surprises with a game that draws attention both for its visuals and for its narrative. Just as it happened with Seven knights 2.

Ni no Kuni: Cross Worlds is a beautiful game with character design by Studio Ghibli, indispensable for fans of Japanese animation.

Despite many categorizing the game as a "competitor" to Genshin Impact, Cross Worlds is actually an MMORPG. So some conveniences (and problems) of this type of game on mobile will be present here, like auto-quest and auto-battle.

Combat will remind you a lot of Genshin Impact, but world exploration is not so vertical. In combat, the main difference is the use of little monsters that help when fighting.

Another big difference is the PvP arena in which players can face each other. Something very requested in Genshin and that is already available here at the beginning.

But, those looking for an MMORPG with a focus on history and beautiful landscapes, will be surprised by Ni no Kuni: Cross Worlds. The game is radiantly beautiful, it was developed in Unreal Engine 4.

Is it worth downloading?

Anyone who likes MMORPGs and is looking for a game that really belongs to the genre, but that has an interesting story at the very least, will be surprised by Ni No Kuni: Cross Worlds. The game is very plot-focused and delivers an exciting plot.

Once the main story is over, players can fight in PvP or just explore the game's beautiful open world. Filled with creativity, the worldbuilding is magnificent and full of creatures and beings different from the common standard of mobile MMORPGs.

add a comment of Ni no Kuni: Cross Worlds is now available for download on Google Play and App Store