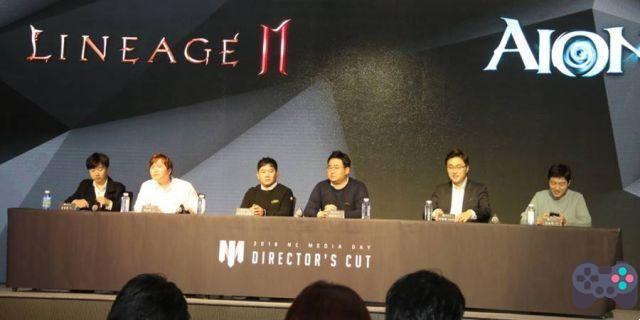 NCSoft held a press conference. NC Media Day 2018 showed that the producer came to Mobile in force. Known for Lineage on PC, NCSoft announced that all games shown in the presentation are for mobile phones. Check out.

Watch the trailer with all the games

This kind of press conference is a little boring. Almost everything is presented in cinematics and little in gameplay. Fortunately, right at the beginning of the video, we see Lineage M's gameplay. I found the presentation a little raw, they should have worked better on the trailer.

See other games that were featured at the conference.

Aion 2 will take place 900 years before the battles between the races of Angels and Demons. The plot and description are very reminiscent of Aion Tempest which was first reported in our 2018 new mobile games video, will it be the same game? If so, PC gamers won't be happy.

Keep in mind that there is an Aion available for Android, released in 2017.

Another announcement that will make PC gamers very angry was Blade & Soul 2. The game will be the direct sequel to the popular MMORPG. Once again, players got a cinematic trailer that doesn't show anything about the game.

We remind you that Blade & Soul Revolution will also be released for mobile next month. This game is being developed by Netmarble.

Yes, four Blade & Soul games planned for 2018 and 2019. But luckily, for mobile gamers, Blade & Soul M looks like a really promising game. This impression is due to the fact that M appears to be a remake of Blade & Soul on the PC. The game, like all the others announced here, will use the Unreal Engine 4.

With Lineage 2 Revolution doing well around the world, NCSoft would probably like to have released Lineage 2M later this year. According to the developers, Lineage 2 M will be the biggest open world game for mobile phones. We first reported him in the New Games 2018 video.

Players are free to explore the world without being limited by the rules set by the developers, with over 100 million square meters of land to explore. Sounds promising right?

The development team is also working on original classes not found in Lineage II, as well as trying to recreate all 31 existing classes. On this note, they aim to have multiple growth paths for players. NCsoft's claims Lineage 2M will not only satisfy Lineage II gamers, but also gamers who haven't tried Lineage II on PC system yet.

Need for Speed ​​Edge: game enters beta on Android! But only in China and Korea ❯