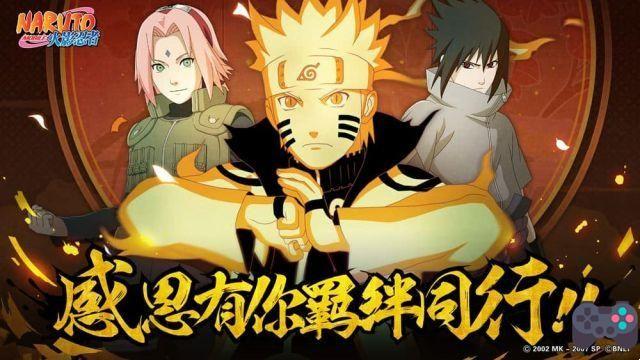 No, this is not a new game. Naruto : Ultimate Storm it's the same Naruto Mobile released back in 2016. But the game is still so amazing that it's worth revisiting this great game, even though it's 100% in Chinese.

The last update added a lot of content. Naruto with Nine-Tails Chakra Mode (Kurama) is available. Sasuke in Akatsuki is also available (actually, it was before). Mei Terumi (with Summer May) and Yūgao Uzuki and Hayate also arrived.

A new adventure is available, none other than “The Fourth Shinobi World War”. For fans of a good dungeon, a new dungeon with 110 levels is available for you to test your characters.

Available on Tap Tap, Naruto : Ultimate Storm is an impressive action role-playing game that instantly captivates any fan of the orange ninja.

Installing Naruto : Ultimate Storm is even easier. Just have the Tap Tap website app installed and search for the game. The application controls and updates all Chinese games downloaded by this platform.

However, you will still need to have installed the “WeChat” app, the “Chinese WhatsApp” to be able to log in and play. The process of installing WeChat and authenticating in the game is the same as it used to be. In case you haven't seen it. Look here.

Even with the open beta (half a failure) of Naruto Slugfest, I still consider Ultimate Storm the best mobile game in Naruto. Tencent's game still demonstrates all its quality and certainly deserved a western version.

For those who don't know, Naruto : Ultimate Storm is a Beat'em up style RPG and action game. The player goes through small scenarios where he must beat his enemies and level up his characters. After experiencing the story, the player can fall into the fray in fun multiplayer matches. Unfortunately, the multiplayer mode is a little unfeasible for us Spaniards, due to the high ping, but it's still a great action game to check out on mobile.