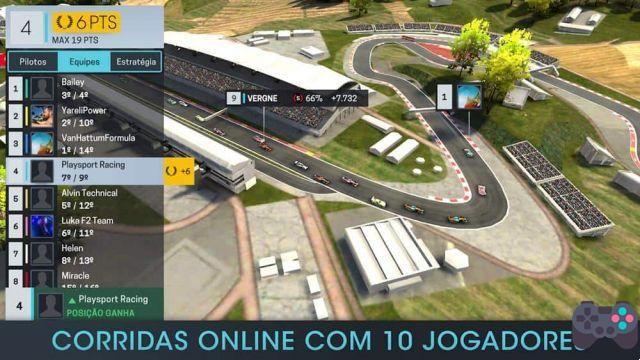 Motorsport Manager Online is the free version, and as the name says, needs internet, of the popular franchise where you manage a Formula 1 team. Available for Android and iOS, the game allows you to play against other players on online circuits.

For those who don't know, Motorsport Manager is a strategy game in which you are the owner and manager of a Formula 1 team (or Formula E, in this version) and Stock Car. Your mission is not to race the cars, but to manage the team so that it is champion.

The game cycle is very similar to other Motosport games. The difference is that instead of racing against the game's AI, you will compete against other players.

10 Formula 1 Games for Android and iPhone

It's interesting how the company separated the multiplayer. Players stay in giant “rooms” that correspond to Formula 1 circuits. But when it comes to racing, the race is only against 9 other runners. It is worth remembering that in this type of game, you do not control the car.

For being free, the game gained some elements of monetization as bars and energy limiters. As drivers or car parts get stressed, you have the option to buy new parts, change drivers, and more.

In terms of graphics, Motorsport Manager Online is a little inferior to other games in the franchise. There is a reason for this. As the idea is to reach the largest possible audience, the game needs to be light to run on as many devices as possible.

This was certainly a step we knew Playsport Games would take. There was absolutely no point in not releasing an online version of Motorsport Manager. The positive side is that everyone will now be able to experience this type of game. Who wants to play offline, focus on the first 3 games in the franchise. Those who want to play online can have fun with this new release.