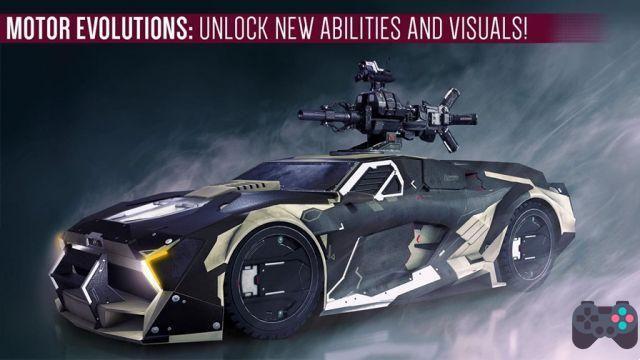 Motor Planet is a car racing game that seeks to add a little more aggression to the genre. The game follows the concept that cars have weapons and you have to blow up your opponents. The highlights of the game are the multiplayer mode and the freedom to hide and even play camper in the game.

In racing games with armed cars, being in first place is not always a good idea, as we can become an easy target for enemies. And that's why Motor Planet's multiplayer mode is so much fun. In the game, when weapons are released to be used, it becomes a "god help us" and you have to be careful not to be exploded.

As the races are a bit long, the player can also adopt the following strategy. Advance a lot in the first position and then hide and wait for the opponents to pass to blow them up from behind.

It's tempting to view the game as a Asphalt 8 mixed with Cyberline Racing, but with a little more freedom to move, the game does not penalize you, for braking or turning the wrong way. The graphics are very beautiful and the audio is composed of music by the same composer of games like Fallout 4, Crysis and Dragon Age: Origin.

Of course, Motor Planet has built-in purchases which are in the form of new cars and new weapons for them. In the best pay-to-win example, whoever has the best set of cars wins.

Motor Planet is a game with a Mad Max atmosphere that brings a lot of destruction and wrecked cars to cell phones. The game stands out for its long tracks and online multiplayer. But it would be interesting to put, from the beginning, more weapons at the player's disposal.

If the game appears as incompatible, try the website apkpure