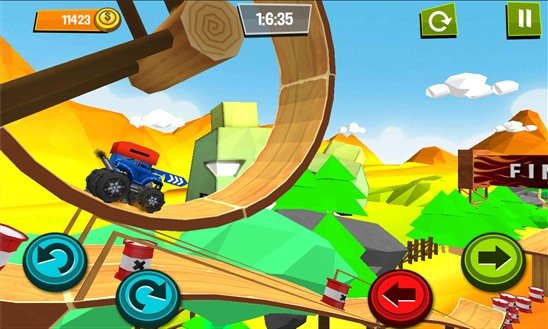 Em Monster Trucks Unleashed, the objective is to complete the levels passing through various obstacles and performing incredible stunts. The game is of a very popular genre, but stands out for being present on all three platforms (Android, iOS e Windows Phone).

The proposal is simple, there are 50 stages to go through and the player has only three monster cars available, which look more like toy cars. But the problems start, when only one cart is free and the other two require you to pay for them.

This makes Monster Trucks Unleashed an insanely difficult game, perhaps the hardest game of its kind. This is due to the fact that it is possible to complete the entire game with just one car, but it takes a lot, a lot of skill to do it.

There are four commands: accelerate, brake, lean to one side and to the other. The first 6 tracks are very easy, but from the 7th, the game starts to get very difficult. It is not possible to buy the other two cars with the coins collected in the game. The player can just rent the car or ask for tips.

Monster Trucks Unleashed looks like a silly game, but the developers were sadistic in creating very difficult levels. The vast majority of players will give up on completing the game, but for those who feel like throwing their cell phone at the wall, I tell you this: buy the other two cars soon, the game is much easier.

Monument Valley and other paid games are free on Android ❯