Modern Combat Versus: Everything You Need to Know Before Launch 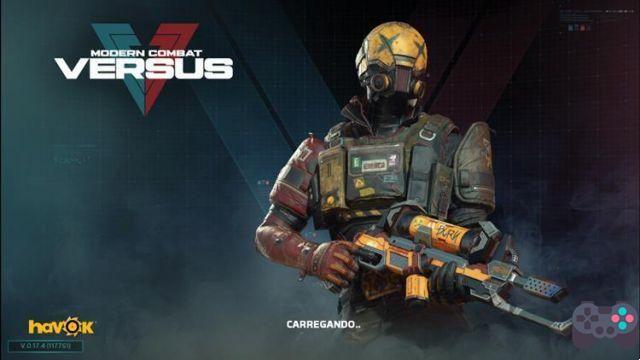 Still lost not knowing exactly what Modern Combat Versus is? Understand what has changed and what Gameloft's next FPS will look like.

[UPDATE] Game already released in Spain! See how to download on Android

During the test (soft launch) of Modern Combat Versus, I saw a lot of people lost without understanding exactly how the game is. Players trying to rush K/D, without helping the team and without activating their abilities. A real mess!

Before commenting on anything, it is necessary to make something very clear: Modern Combat Versus is a totally different game from MC 5. In terms of both gameplay and graphics, MC Versus is another experience that bears little resemblance to previous games in the franchise. In short, it can be considered Gameloft's “Overwatch”.

“Modern Combat Versus is a totally different game from MC 5: Blackout”

Modern Combat Versus is an online shooter with a focus on multiplayer. There is no campaign mode. In beautifully detailed settings, up to 8 players face off in zone control battles (so far the only battle mode). Players can choose from 12 characters called agents.

The zone is in the center of the map and a team must dominate it until the end of the match to achieve “100%” dominance. Whoever reaches that percentage first wins the round.

Don't just choose any agent. Modern Combat Versus looks like an “Overwatch” with a military and futuristic look. Each team character needs to have unique skills to be able to work together and win the match. Therefore, during each combat, the player can choose up to 3 different agents to fit his character into the match and help his team in the best possible way.

– The Game Cycle: The Modern Combat Series’ Shift in Focus

The Modern Combat Versus game cycle is very different from other games in the series. Much more casual, MC Versus consists of winning matches to unlock chests with new agents and in-game currency.

As you gain agents, the player can evolve them and make them stronger. Something similar to Clash Royale's card upgrade system.

At the time of this post, the game has only two modes: Multiplayer and Single Battle. The multiplayer battle yields a crate if your team wins. Individual combat yields one box for every three victories. Despite being singleplayer, individual battles still require an internet connection. Each crate can contain agents, coins, etc.

So the game cycle is this. You play to collect crates and with the resources coming from these crates you can evolve your agents or unlock new ones. At the moment, the game does not have boxes with different weapons and skins. But this is presented as “coming soon”.

The world needs agents. In Modern Combat Versus they are available in the form of 12 characters with unique characteristics and abilities. Each possible agent has its role on the battlefield, which can be: 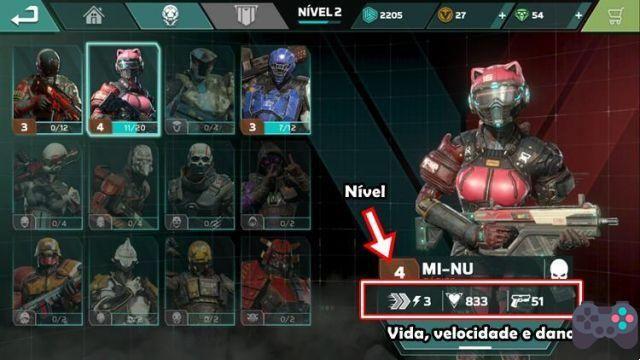 Each agent still has its rarity and class levels. In the beginning, of course, you will only unlock basic agents. But there are also professional and elite agents. The class level can be evolved as the player gets more duplicate agents. By leveling up an agent, they gain more health and damage potential.

– The resemblance to Overwatch

There's no denying some inspiration from Blizzard's hit game. This is something that leaves many players confused, but it is enough to “assimilate” that we are in a different Modern Combat to better understand and enjoy this new style of game.

Examples: Agent Tower has a very similar skill to Reinhardt. He can use a shield to defend teammates and push opponents. Sw1ft, on the other hand, has a time manipulation mechanic that is very reminiscent of Overwatch's Tracer character. Did you understand?

The inspiration, fortunately, is only in the mechanics of some characters. MC Versus is not a copy of Overwatch. Gameloft's game has a very different look and dynamics than Blizzard's game.

– Everything has changed in gameplay

Modern Combat Versus gameplay has changed from the previous game because of abilities. Blows that stun, trap or burn the opponent, even after some time, is a new element in the series.

Skills are essential to victory. Because the game is no longer about killing enemies, but dominating a zone. During combats, at the bottom of the screen. There is an energy bar that will charge as time passes. From time to time, the player may activate his agent's skill. So far, agents have only one skill, but that may change as they evolve.

The shot also changed. In the beginning you have to pour a lot of bullets to kill a single enemy. And it's not because he is at a higher level, but because everyone is at Level 1 or 2. Then it becomes easier to kill enemies, as your characters evolve. Agents' health is recharged if they are not killed.

K/D (frag) is still important, but it's no use killing the enemy's entire team if you lose control of the zone. The essence of Modern Combat Versus is teamwork. Well executed, teamwork completely dominates the player who is only looking to increase his K/D.

Combat needs to have a balance between the agents. For example, playing without a defender is asking to lose. For a defender is essential to maintain control in a zone. Some agents have more health than others. For example. Defenders have around 2.000 health, compared to 800 for Assassins. However, assassins are much faster and more lethal. During the game test, I died laughing at crazy people who were trying to "rushar frag" on me, and I just had to push them with the defender's shield.

Leave the auto-firing discussion for last. In this type of game, more casual (MC Versus is, yes, a game that seeks to be simpler and more casual) this is not even a problem. Here there is no need to save bullets, and the automatic fire helps beginners a lot. However, it may be that as the game evolves towards more lethal weapons, leaving the shooting in the manual will be more interesting.

There is even a “Toggle Action” mechanic that is not the same for all characters. Some activate a crosshair by double-tapping the screen. Others activate a second ability. As for example the Ronen (the samurai), who shoots with his sword in the direction of the opponents.

We arrived at a part of our preview that is quite controversial. Many people complained about the Android version test because it was much inferior graphically to iOS and Windows 10. In fact, on the vast majority of devices, MC Versus runs visually on Minimum and High, but not on Ultra.

So far, only the Windows 10 PC version has a visual editor where you can set quality, anti-aliasing and even frames per second.

Comparing with the iOS and Android versions, you can see that Modern Combat Versus has 3 levels of graphics configuration. You can see all three in the image below. 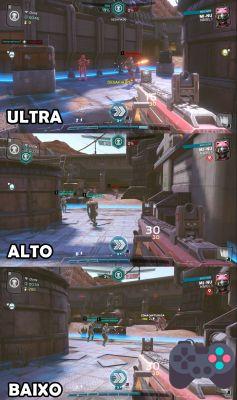 Although on many Android devices the look of the game is compromised. It is worth remembering that this helps with a good frame rate per second (FPS) and in not demanding too much from the batteries. However, it would be great if Gameloft left that decision up to the customer.

As it is, Modern Combat Versus is a very interesting game for championships (e-Sport) and for the competitive scene. Departures are quick (about 3:40 minutes). However, it would be nice if Gameloft improved its brood a little. The game urgently needs more game modes and more skills for each agent. It would also be interesting to have a dubbing in Spanish, or a voice chat system with your team, because without understanding what the agents say, it is evident that many people do not know what the game is about.

Is MC Versus Paid?

A: No, the game is free and it is possible to evolve agents without many restrictions.

Got a power bar?

A: No, you can play until your fingers are tired.

When will the game come out?

A: There is no date set, but everything indicates that it is still this year 2017.

Will my Android phone be compatible?

A: Apparently, the game will follow the compatibility of games like Gangstar New Orleans and Iron Blade. In other words, it will only cover devices with a recent GPU from 2015 onwards.

Is MC Versus Modern Combat 6?

A: The game looks more like a spin-off focused on online multiplayer.

Modern Combat Versus: Here's How to Improve Graphics on Android ❯

add a comment of Modern Combat Versus: Everything You Need to Know Before Launch