Mobile games that profited the most in September 2020

Want to know which mobile game made the most money in September? Check out!

The top grossing mobile game worldwide as of September 2020 was Honor of Kings (no surprises). Tencent's game pocketed almost US$ 240 million in user spending (about R$ 1.3 million reais). This represented an 87% growth compared to September 2019. For those who don't know, Honor of Kings is the Asian version of Arena of Valor.

Approximately 96% of Honor of Kings revenue came from China, followed by 1,5% from Taiwan and 1,2% from Thailand. The complete table with the highest revenue games on smartphones in September, you can see below. 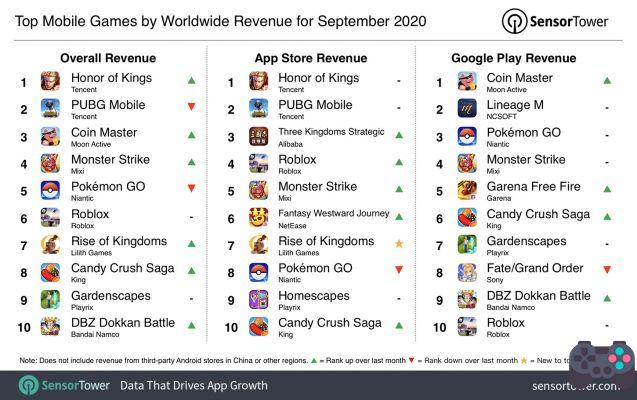 PUBG Mobile, also from Tencent, appears second in the overall ranking (on the left). In the month of September alone, PUBG Mobile earned US$ 198 million dollars (R$ 1.1 million reais)

About 56,5% of PUBG Mobile's revenue came from the Chinese version, Game For Peace, followed by 12,4% from the United States. The next highest grossing game was Moon Active's Coin Master, followed by Mixi's Monster Strike and Niantic's Pokémon GO.

Free Fire appears in fifth position on Android. The game has moved up one position. It was sixth and went to fifth. September is the third month in a row with an increase in Free Fire revenue.

Coin Master was another title that had its best month, grossing nearly $113 million in player spending, up 630% year-over-year. Revenue from the title has been growing since the beginning of 121, surpassing US$2019 million (R$500 million reais) in October last year. Coin Master shows that it is still the force for ultra casual gaming on mobile.

NFT games: interest in the subject reaches the lowest level in the last 12 months ❯