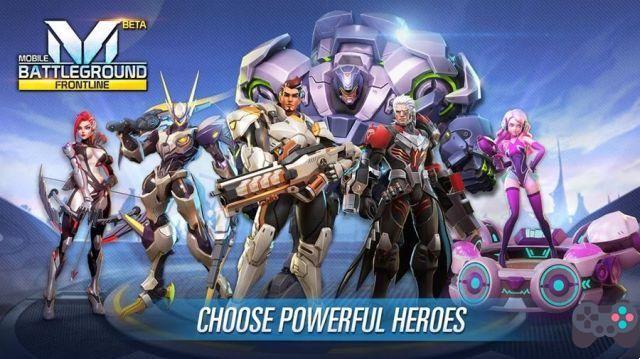 Mobile Battleground: Frontline is the name of a new third-person shooter that will come soon to Android and iOS. The game is currently in beta testing, but you can already test the title by downloading the APK. The game, despite having Battleground in the name, is more of an "Overwatch".

So far, Mobile Battleground: Frontline only has a single mode, “Quick Match”, but other modes should arrive by launch. This mode consists of two teams of 4 players facing each other in an arena. The objective is to take and defend part of the scenario.

The highlight of the game is combat, where you can use up to 3 skills for each hero. The characters, needless to say, have retread mechanics from games like Overwatch and Paladins. Anyway, some will have the ability to speed, others to go back in time, shields, all the fuck. You can even guess the skill by the appearance of the heroes, clearly inspired by the success of Blizzard.

Mobile Battleground: Frontline is lightweight, runs well on any smartphone. It's only 99 MB to download. The game has potential, but it needs to keep an eye out for competitors in the “Hero Shooter” genre like Hero Mission, Heroes of Warfare and of course, Modern Combat Versus.