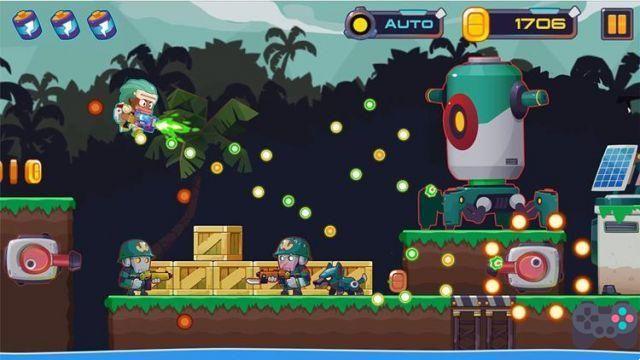 Metal shooter is a run and shoot game with 2D levels and colorful visuals. Available for Android, iPhone and iPad, the game combines offline gameplay and many scenarios to explore.

Altogether there are 45 stages in 4 different worlds. Metal Shooter has a part in the RPG, according to the creators, but it comes down to making character upgrades.

In this game, you control a character who is equipped with a weapon. As in all “Run and Gun” games, your mission is to walk to the right, killing all the enemies that appear along the way.

Metal Shooter's commands are very simple. In the left part of the screen is a virtual analog to control the character's movements. On the left side is the only shooting button and another one for jumping.

As you progress through the game, you can unlock new weapons, either through daily rewards or with in-app purchases. Despite being freemium, Metal Shooter can be finished without using real money.

In the best style of 16bit games, Metal Shooter captivates with its 2D graphics and simple commands. It's the kind of game where we "don't give a damn for it", but find ourselves wanting to know how the game ends. The beginning is a little monotonous, but just face the first boss and things get interesting.

Metal Slug 4 is released for Android and iOS ❯

add a comment of Metal Shooter: Metal Slug-style game, but with colorful characters