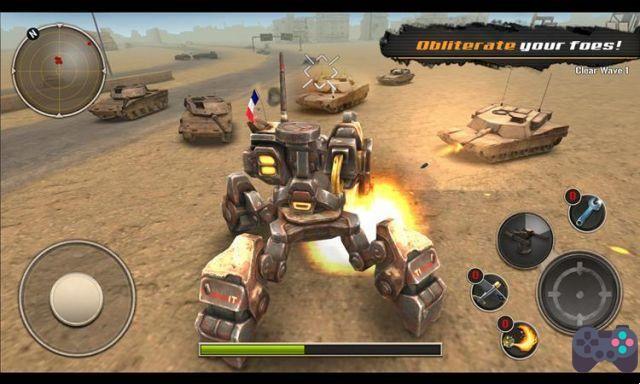 Mech Legion is a robot shooting game. In command of Mechas, these giant tanks with four legs, the player will face 28 missions alone or an infinite mode. Available for Android phones, the game is free and offline.

Produced by Vasco Games (the same as Miami Saints), Mech Legion follows the principle of being a simple and fun game, ideal to play anywhere. By keeping it simple, the studio ensures smoother gameplay and no energy bars.

In Mech Legion, the player has five powerful machines to use on 28 battlefields. Campaign mode missions start out simple. Only with tanks to destroy. But as the game progresses, enemies with Mechas begin to appear.

There is also the infinite mode where instead of different scenarios, the player faces several waves of enemies in the same scenario. Ideal to pass the time, this mode is pure challenge.

Mech Legion Mechs can fire with their main cannon or use secondary weapons like a flamethrower. Also, if you're in trouble, you can ask for aerial backup.

With good 3D graphics and simple gameplay, but assertive in enabling offline play, Mech Legion is a reasonable game that doesn't require internet. Could he be any better? Could! But thinking this way, the developer would want to add a lot of monetization, energy bars, etc. For those looking for something more elaborate, I recommend it. Warhammer 40,000: Freeblade.