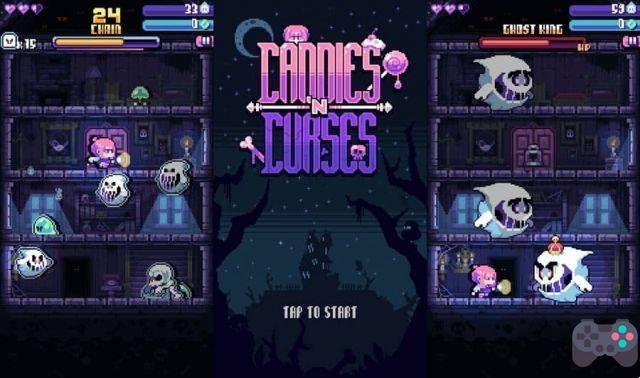 Candies 'n Curses is a game for Android and iOS, which could very well have been released on the late Super Nintendo. In this 2D arcade game, we control a girl named Molli and her faithful dog, facing ghosts in a haunted mansion.

The game is from newcomer Takoboy Studios, Crescent Moon Games is just the publisher. The bet on nostalgia, in combination with agile gameplay and quick matches, yields a 2D game with a very beautiful pixel art.

But despite the cute look, Candies 'n Curses is that kind of arcade game that “doesn't go over your head” for the player. The game's difficulty is way above average and you will die many times before getting past the first boss.

But the game cycle is the same. With the flashlight, we detonate ghosts and collect souls that can be exchanged for upgrades or better items. You can also spend real money or see ads to increase your rewards.

However, offline is where the game shines. Simple and straightforward fun that works great on any Android phone.

The character walks alone and it is up to the player to decide when to go up or down the floors. Despite the auto-run, it is possible to change the direction just by swiping your finger at any time. When approaching a ghost, Molli's flashlight destroys the ectoplasm. However, it is necessary to be aware of the ghost hitting the character from above, below and from the sides.

Despite being an arcade game, it is possible to complete Candies 'n Curses. There are only 6 different regions of the Phantom King's mansion. each features unique ghosts and zombies with a powerful boss at the end.