Lineage 2M, NCSoft's new MMORPG was released globally yesterday on Android, iOS e PC. But what caught my attention was the button to directly install the game on Windows from the Play Store. 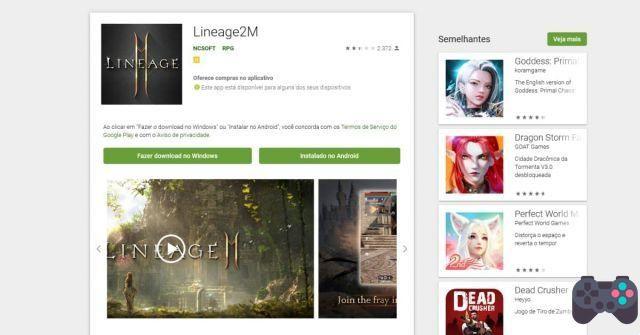 Lineage 2M is the mobile version (remake) of Lineage 2 from 2003. The game is also a prequem to Lineage M, and takes place 150 years before the new game in the franchise. Made in the Unreal Engine and with heavy graphics, Lineage 2M requires at least a recent device with 3GB of RAM, and 5.8GB of data to download.

Despite the somewhat turbulent launch (the game is having access problems in Spain) one thing caught my attention. When opening the game's page on Google Play, on the computer, we come across a beautiful “Download on Windows” button.

As you all know, it is a common practice for these MMORPG companies to release their games in multiplatform format. The ones that don't release are pretty friendly with the practice of emulating their Android game on PC.

It is worth remembering that it is not Google Play that "converted" the game to PC. The "Download on Windows" button is just a direct link so you don't have to go to the game's official page to download or go google search and land on some fake page. It's something simple, but pretty cool, and it makes life a lot easier for those who are going to play on multiple platforms.

Lineage 2M gets an English version on Android and iOS ❯