Legendary Heroes: OFFLINE MOBA is a hit on Android and iOS 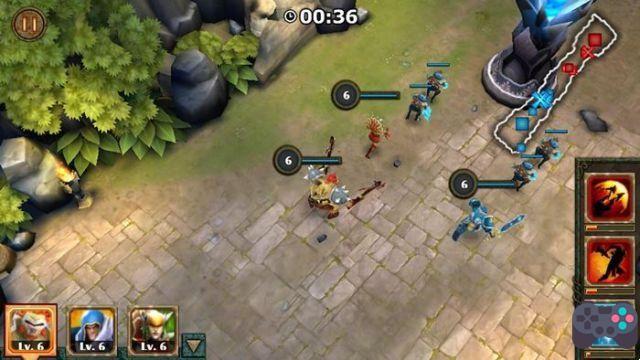 It's a controversial concept, but much sought after by MOBA lovers. everyone is looking for one MOBA OFFLINE to play on mobile, and here it is. Developed by Spaniards, o game LegendaryHeroes (we already talked about it in 2012), it continues to captivate players of both systems (Android e iOS).

Legendary Heroes is very similar to other titles of the genre, but its main highlight is the mission system. In it, the player can face challenges and train completely offline. The most interesting thing is that the gameplay is divided into phases, as if it were a solo game.

Another great positive point of the game is the fact that it is all in Spanish. The commands are not hack'n slash style like Mobile Legends and other more recent MOBAs. The player must tap on characters and abilities to activate them.

The first stages have only one lane, but as the player progresses, the player can unlock new scenarios with more lanes, new heroes and even more intense challenges. In all, the game has 30 different maps.

Legendary Heroes is quite light. The 3D graphics are nice, but not heavy. The game runs very well on the vast majority of smartphones. There's no problem running it, for example, on the first-gen Moto G.

Legendary Heroes is the answer for anyone looking for an RPG/RTS game or an OFFLINE MOBA. The game is quite light, has simple commands, and the fact that it's all in Spanish only helps to captivate more and more players. Despite the hero design not having much charisma, the game has everything to have a beautiful future ahead.

Legends of Runeterra Launches Globally on Android and iOS ❯

add a comment of Legendary Heroes: OFFLINE MOBA is a hit on Android and iOS