This Wednesday (18) the game was released on Android and iOS KonoSuba Fantastic Days. Published by Nexon, the game from the popular anime takes players on a fun RPG-Gacha-style adventure. 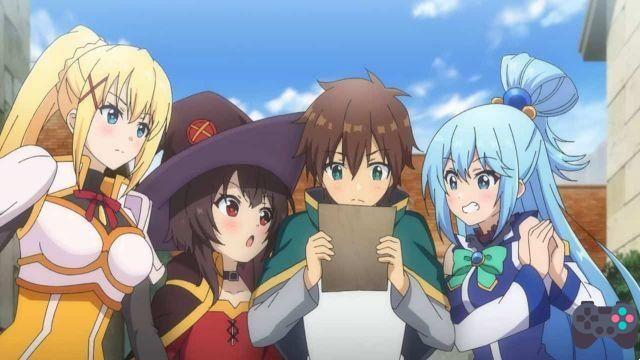 KonoSuba Fantastic Days is quite light, the game runs on most cell phones and is all in Spanish. Like the anime, the game stands out for having a fun and humorous story.

KonoSuba Fantastic Days is now available for download on Android and iOS, but today (18) is just the pre-download of the game. His servers will only open tomorrow (19).

◆ An Adventure in Another World
Join the newly reincarnated Kazuma in his quest for a comfortable, carefree life. Not knowing what's to come, Kazuma will soon be tricked into saving the realm from the Demon King's control! Relive KonoSuba's most hilarious moments with scenes perfectly rendered in Live2D animations.

KonoSuba Fantastic Days requires an Android device with at least 2GB of RAM to run. As mentioned above, the game is all in 2D and therefore it should run well on the vast majority of Android phones.

On iOS, the minimum requirement to play is an iPhone 6S or higher.

What to Expect from KonoSuba Fantastic Days

Like every anime RPG with turn-based battles, KonoSuba Fantastic Days has gacha elements. In this type of game, the player's main objective will be to live adventures with the characters from the anime, while trying to collect all of them. Try to assemble the best team to get as far as possible.

From the faithful design of the characters, to the famous Japanese voice actors, the game is pure fanservice (in a good way, of course!). KonoSuba Fantastic Days was all designed to please anime fans.