Kingdom of Pirates is the first western title from Garena International II, a subsidiary of the same company behind Free Fire, located in Singapore, and is available for both Android and iOS.

Kingdom of Pirates is a role-playing and resource management game that allows players to collect pirates, build naval fleets and conquer the oceans from one of three factions the player chooses to embark on this journey. 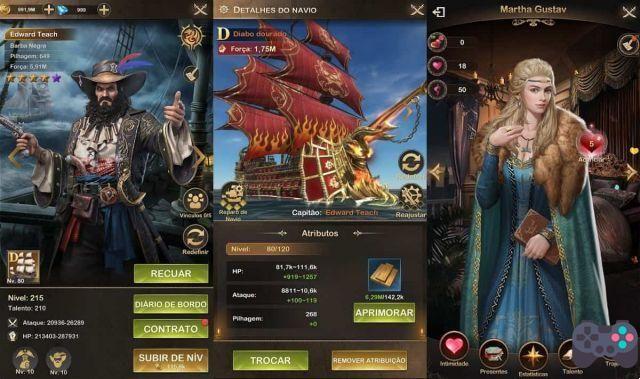 In addition to recruiting new pirates to your band and increasing your power, you will be able to visit the wonders of the world, strengthen your pets, as well as prepare and educate descendants and successors. Just like in the sea of ​​pirates, in Kingdom of Pirates, players will face the most diverse enemies, in addition to discovering new navigation routes and having fun in minigames. Check out a trailer for the game:

Among the available factions are: The Viking Pirates, where players prepare with Norse warriors; Pirates of the Caribbean, one of the most famous seas in the world, where we must defeat the rival and pirate that existed in real life, Edward Teach, better known as Blackbeard; Finally, the Pirates of the Middle East, where we will fight at sea against Western powers.

A recent update brought the Vikings Pirates with more content and new objectives for players to rebuild the Norse empire. In addition to new characters, ships, etc, all themed in the Viking theme.

The game arrived this month, but it has already achieved very high averages on both the App Store and Google Play. In the apple store in Spain the game has 4 evaluations with maximum marks. On Google Play, the game has over 20 reviews and over 500 downloads, with an average rating of 4.7/5 stars.

Even with the overwhelming majority of users rating the game with the highest score, some players complained about pay-to-win practices in Garena's game, which can harm the top ranking in it.

Remember the 'Fast and Furious' Games for Android, iOS and Java Phones ❯