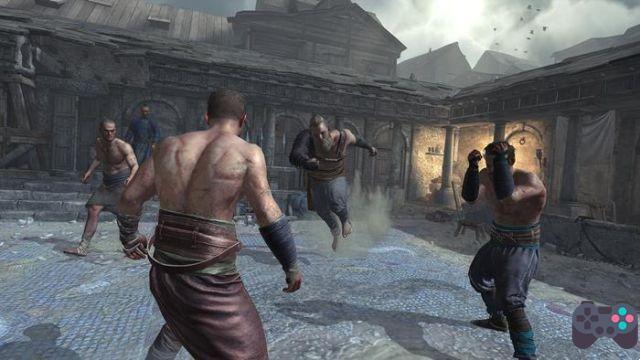 King Arthur is the official game of the movie King Arthur: Legend of the Sword that opens on May 18, 2017. Who has a cell phone with Android ou iOS, you can already know the story of the new film. Starring actor Charles Hunnam (Pacific Rim), the game features action scenes in a mix of fighting game and hack'n slash.

The visuals of the game are impressive and the quality of the campaign is also impressive (compared to Warner's history of making bad games). Yes, it's a free to play game and it clearly has its limitations. Even so, it's guaranteed fun for anyone looking for a free game.

At the beginning of the game, you control King Arthur in his training, when he is interrupted by assassins. The controls are simple, just tap the screen to perform moves. The character automatically moves towards the next enemy. Sliding the finger in different directions, more powerful blows are performed. There is also a counterattack that works in a dubious way.

The graphics are made up of very well done character models. The level of detail is impressive. There are day and night events, and good light and shadow effects.

The only problem is the repetition. Everything happens in practically the same place. With enemies always arriving in the arena and you having to face them all.

King Arthur is another one of those games that capture us through the images, but that reveal themselves to be simple and repetitive. Despite this, the game has good elements such as great graphics and reasonable gameplay. Unfortunately he is short. But on the other hand, it is possible to finish the game without spending a single penny or being interrupted by tons of ads. Point for Warner.