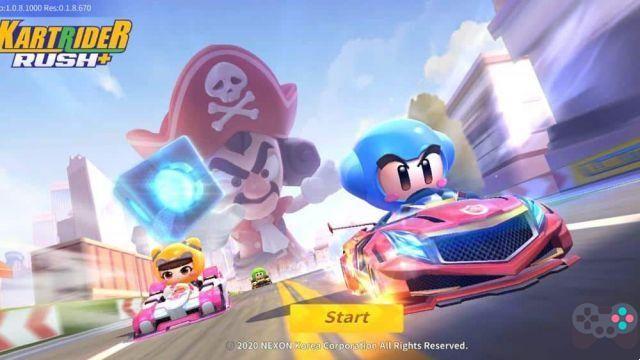 Now available to download the game KartRider Rush +the game the kart with strong influences from the Mario Kart series, it brings the characters from the BnB Crazy franchise into fun disputes online and. the game is free of charge but requires internet connection.

Developed by Nexon, KartRider Rush+ seeks to compete in the new and already relatively busy sub-genre of Kart racing games. This franchise had already bet on games of the genre before. Rush+ would be an improved, global version of the previous game, KartRider: Crazy Racing. The characters from the BnB Crazy franchise already ventured into karts on cell phones in 2012. In partnership with Nexon, the game was released in 2012, and of course, we were there to check it out.

The look is cute, with good graphics. Controls are accessible and conveniently placed. You have arrows to move the car, buttons to fire items and so on. One of the highlights of the game is the possibility of using up to 3 items at the same time.

The downside is the amount of built-in purchases. This type of game does not arrive on Google Play and App Store for nothing, companies hope to profit from the sale of skins and consumable items. Unfortunately, most of the items are not cosmetics, they do influence the gameplay… a lot.

But for those looking for just a little kart game to pass the time, KartRider Rush+ isn't that bad. The game allows you to play Arcade mode alone. The races are fast but very intense.

add a comment of KartRider Rush+ Launches on Android and iOS