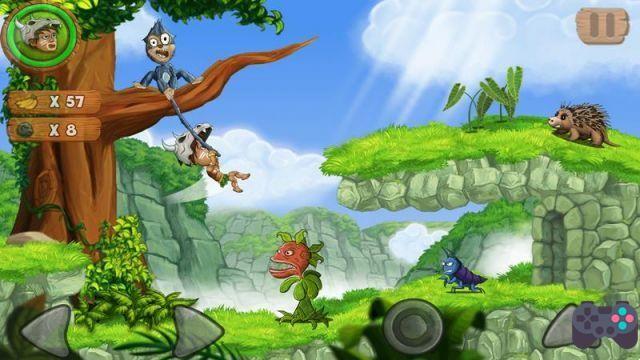 Jungle Adventures 2 is a platform game for Android inspired by old Super Nintendo classics, such as Super Mario World. The game may look like it, but it is not a sequel to Jungle Adventures released in 2016.

Jungle Adventures 2 doesn't even have the best graphics of this type of game, but it really stands out for its mix between the classic and the new. The game has many stages, bosses to face, and – like any good free and offline game – it is possible to beat it without having to spend anything.

With 25 stages in total, the game's plot is quite simple. The fruit forest is in danger. A powerful mage stole all the fruits from the jungle to become immortal. Addu, our fearless adventurer, and his faithful companion Bullion set out on an adventure to bring the fruits and life back to their homeland.

The game mechanics are simple. Jump and throw objects at enemies. You can throw small stones and fruits at the monsters.

Jungle Adventures 2 has a ton of ads when the internet is on. But when you're offline, the gameplay is pretty good. The commands are simple and the game has bosses that offer a good challenge. Best of all, it is possible to finish the game without spending a penny.