Meet a new offline game for Android inspired by Minecraft.

As many know, Minecraft-like games have been appearing year after year on mobile devices, among them many stand out with very positive reviews and today we are going to talk about one in particular. 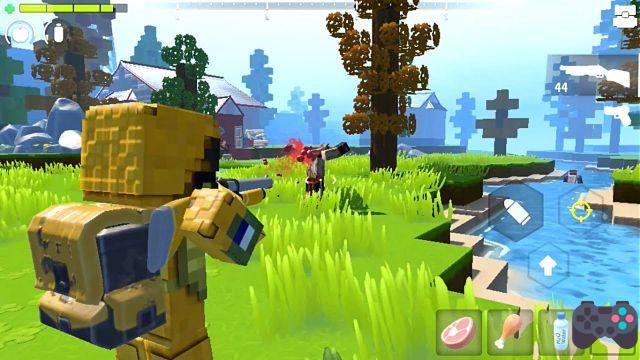 Huntercraft: Zombie Survival is a survival shooter developed by Candy Room Games & RabbitCO that is in early access on Google Play right now, meaning it's still in development.

The game takes place in a post-apocalyptic world where most people have become undead or walking skeletons. Your mission is to cleanse the world of these atrocities and survive at any cost.

Survival doesn't just depend on staying alive and not getting eaten by monsters, but also keeping well fed and hydrated, and keeping an eye on your health. The developers also explain that during the winter, players will need to keep warm, which could indicate a season system in the official release of Huntercraft.

Another factor that draws attention is the game's "destructible" physics, which allows players to tear their enemies to pieces. Despite being an almost copy of Minecraft, it is possible to notice several differences, including the character movement and animations, in addition to the implementation of survival features.

As with Mojang's game, Huntercraft: Zombie Survival has a creative mode, which allows players to freely create their cubic worlds.

Player reception has been overwhelmingly positive on the Google store, achieving an average rating of 4.7/5 stars with over 14 reviews and over 500 installs.


The game is available for Android via Google Play, it will require 42MB of free space on your device and 1.5GB of RAM. We still don't know when Huntercraft: Zombie Survival will be officially released.