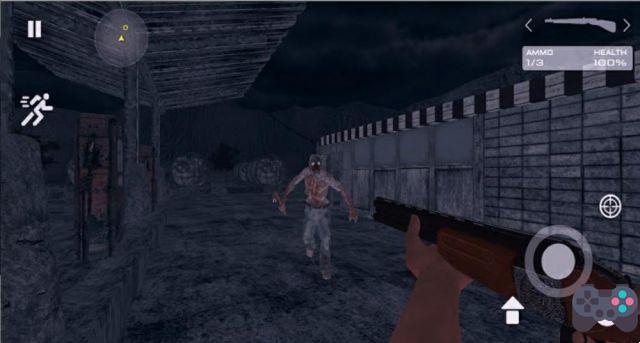 Horror Hospital 3: Dead Way is a first-person shooter in the survival-horror subgenre for Android. It is the third game in the hospital horror series, which is a direct continuation of the second game, where two paranormal investigators, Water and Melissa, were stranded in a ghost town after a motorcycle accident.

Horror Hospital 3: Dead Way is offline e free to download and play, but there are some items that can be purchased with real money inside it.

The third game picks up where Horror Hospital 2 left off. Walter and Melisa visited a different hospital looking for paranormal events for a new investigation. After Walter arrives at the confidential files, they leave the hospital and go home to examine the files.

But on the way, the two have an accident, caused by a ghost that suddenly appears in front of their motorcycle. Melissa is hurt. They need to fix the bike, but they are in a deserted and unknown city full of evil creatures.

Developed by the Unity graphics engine, the graphics are simple. But with a slight improvement over the second game. Some bugs are frequent like enemies and npcs that slide along the ground while walking and the collision box that sometimes fails when you try to hit an enemy. But nothing that detracts much from the experience during the game.

Horror Hospital 3: Dead Way follows the same gameplay and controls as the second game in the franchise. But with some additions and improvements. Your character can run, when the player holds the left virtual button, walk freely around the map and shoot enemies.

The game starts with 3 continues and when you lose them it's game over. However, more continues, symbolized by a heart circle, can be purchased by watching ads or with real money.

Horror Hospital 3: Dead Way a worthy continuation to the franchise. Despite having simple graphics and some bugs, its story and puzzles are well-crafted. Its soundtrack, which appears at key moments, gives the title even more immersion. Being able to continue unraveling paranormal mysteries without needing an internet connection is also one of its main highlights.

Also check out the other Franchise games, all are offline.

add a comment of Horror Hospital 3 – OFFLINE Game for Android