HONOR Choice Earbuds X – review after 5 months of use

After five months it is already possible to have an idea about the quality of the HONOR Choice Earbuds X. He is the best headset for anyone looking for a cheap alternative to Airpods.

The amount of headphones for sale on sites like Aliexpress is immense. Choosing one of hundreds of options can be a problem. Even more so when many promise everything and deliver almost nothing.

The good thing about the HONOR Choice Earbuds X is that. Everything he promises, he delivers. The sound isn't perfect like more expensive headphones that cost twice the price, but it doesn't sound as bad as overpriced headphones either. 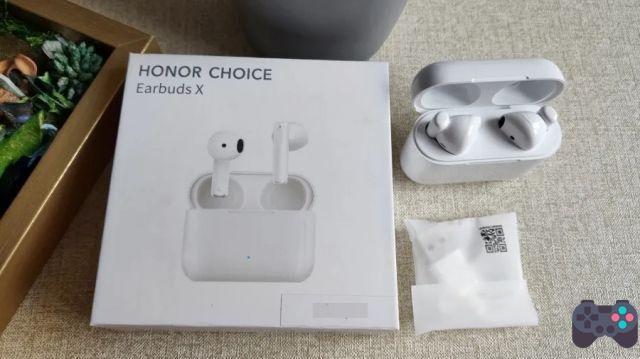 I have nothing against headphones that “enter” the ear like the Syllable s101 – which has been with me since 2020. But I realized that for some people or in some situations, an in-ear headphone is not the best option.

The first time the HONOR Choice Earbuds X made complete sense to me was when doing physical activity outdoors.

With an in-ear headphone, I needed to fix it well in my ear, which made it completely cover my ear. This is fine for indoor use, and for immersion, but outdoors and crossing streets is very dangerous. I just couldn't hear the sound of cars around.

With the HONOR Choice Earbuds X, my concern was that he wouldn't fall during a run. Which fortunately never happened. Even with the noise canceling activation activated, it was still possible to hear sounds around, which helps a lot for those who practice physical activity.

I didn't expect such a good build quality from the HONOR Choice Earbuds X. Both the earbuds and the case to store and carry them make a very good impression.


Instead of physical buttons, the Earbuds X has touch commands on the side. By double tapping they play or pause the songs.

With Bluetooth 5.2, the HONOR Choice Earbuds X connection is quite fast. Just open the right earphone and then the left one. All very fast, as it should be.

In theory, this should also happen with Syllable s101 that has “only” Bluetooth 5.0. But in reality I occasionally experience delays with it. Sometimes one phone connects and the other one “forgets to turn it on” and I have to press its button to “wake it up”. Such a problem does not happen with the Earbuds X.

Now comes the coolest part of this headset. Honor has a dedicated app for further tweaking your audio wearables.

With this application it is possible to activate the “game mode” of the HONOR Choice Earbuds X.

In case you didn't know, it's very common in shooting games to notice a delay when hearing gunshots and the like. This gets in the way a lot in Battle Royale games and it's very common for it to delay the player's reaction time.

The game mode of HONOR Choice Earbuds X manages to mitigate this a bit. You can see a decrease in latency that makes the phone almost perfect for gaming. It's not as perfect as a wired phone, but it comes close.

As we like numbers here, the latency in game mode is around 125ms, against 300ms for a bluetooth headset from other brands. For comparison level, the latency of a wired headset is 5-10ms.

Audio quality is good but could be better

In terms of battery, build quality and comfort, the HONOR Choice Earbuds X gives a show, but it's in the audio.

As a user of PS7.1 5 headphones and other headphones I have here at home, I'm quite picky when it comes to audio quality.

The sound of the HONOR Choice Earbuds X is good, but could be a little better. Bass is lacking, even pressing the headphones against the ear.


But even lacking the most prominent bass, the audio of the songs sounds crystal clear for listening to multiple instruments.

HONOR was a subsidiary of Huawei which is now owned by the Shenzhen Zhixin New Information Technology Co. It is now the number one smartphone manufacturer in China, even surpassing Xiaomi.