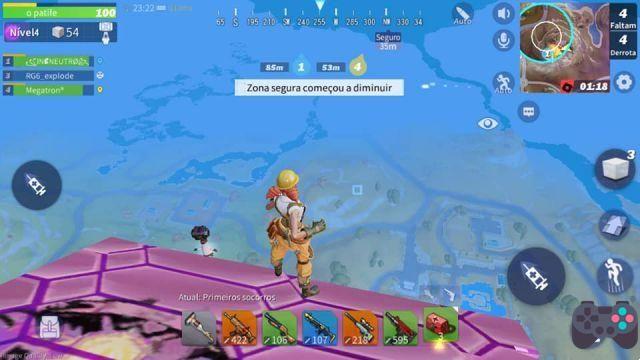 Check out a list of Android games that REALLY look like Fortnite. We chose games that, in addition to having a Battle Royale mode, have construction mechanics or other crazy power-ups.

Of all the games available on Google Play, the most similar to Fortnite is Creative Destruction. For those who don't know, this is FortCraft, that game that NetEase had prepared and that disappeared from the map.

Fortcraft returned as Creative Destruction. The producer was careful not to make the game too similar to the point of receiving a lawsuit, so it can be kind of hard to find it on Google Play.

Creative Destruction's building mechanics are just like Fortnite's. The difference is that there is only one material that improves as the game progresses.

Rocket Royale is another game very similar to Fortnite. But it's not as similar as Creative Destruction (CD). Rocket Royale is more recommended for those who want short matches and don't have a powerful cell phone to play CDs.

With duo and solo modes, Rocket Royale matches have a maximum of 20 players. The game is similar to Fortnite because of the construction mechanics. You can build ramps, walls, roofs, etc.

One of Rocket Royale's differentials is that there are two ways to win. You can win by killing all other players' characters, or by building a rocket to escape the location.

The last game on our list of Android games like Fortnite is PUBG Mobile. But calm down, it's not the Google Play game, but the Chinese version released by Timi studio.

In this version there is a mode where you can do several things, see a list below:

In addition to all this, the game has the normal PUBG modes with Battle Royale without buildings, arcade mode and etc. As if that weren't enough, this version is the first to receive all the news from the Google Play version, such as the Sanhok map.

And here ends our list of Android games similar to Fortnite. Did you miss any? Leave a comment.