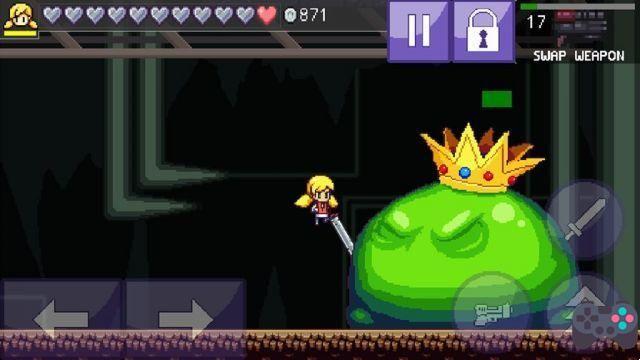 Cally's Caves 3 is a platform game with 16bit visuals and versions for Android and iOS. With clear inspirations in games like Mega Man, and other classics of the 16bits era (Mega Drive and Super Nintendo). Cally's Caves has a crazy plot, but the gameplay and difficulty make up for the bizarreness of the story.

Following the events of the second game, it's time for the final battle between Miss Cally and the nefarious Herbert. Cally is a girl whose parents have been kidnapped and she needs to rescue them. At her command, you can use swords and firearms. Gameplay is simple with buttons to move from side to side, attack and jump, all laid out on the screen.

The graphics are very colorful and the soundtrack is nice. When the smartphone or tablet is connected to the internet, the game displays ads between levels, but it is possible to play offline!

What makes this game special is the ability to finish it without using any money. However, it will not be an easy task. During the game, you collect coins that can be exchanged for better weapons, items to consume or continues. Things get complicated when you die and realize that the game only saves in stages with a "C" written on them.

In all, there are 120 stages with amazing bosses and battles. The game sins a little for not having very elaborate stages and not containing other elements that encourage the exploration of each stage. But the challenge is rewarding, Cally's Caves 3 even includes a second mode where you play a bear. For those looking for a good offline platform game, you can download this and the previous game, Cally's Caves 2 (Android e iOS).

Free Game: MMX Racing gets an update with the WWE beasts ❯

add a comment of Free Game: Cally's Caves 3 is a platform game with 16bit graphics (Android and iOS)