Metal Gear: Outer Heaven is a free game from the Metal Gear Solid series for Android, but calm down! This is not an official game. The fan-made, non-profit game is available for smartphones and tablets running Android 2.x or higher. 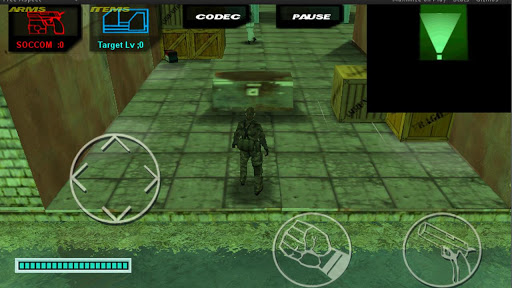 To move Snake use the left directional pad. The buttons on the right are for attack. To access the Codec, the device used for communication, tap on the name “Codec”.

The game is all in 3D, the movement of characters and voiceovers may seem a bit rough, but remember, this is a fan game. The game was developed by a Spaniard named David Amado Fernandez and is the first of its kind on all of Google Play.

We tested the game here and it is a little buggy. During the first installation, the smartphone crashed, and it was necessary to remove the battery for it to work again. On the second installation the game worked. The controls work well and the developer had a lot of work to model the game's characters, the end result is quite interesting. In short, when it works, the game is pretty cool.

However, it is still an interesting and representative game that demonstrates the extent to which a fan's love for this franchise goes.

In some scenes it is possible to notice that the developer used models and game scenes from Metal Gear Solid 3: Snake Eater for Playstation 2. For this reason and for other reasons too, the game will probably leave Google Play. All of this just shows us how great the desire to play games like Metal Gear on smartphones is, and Konami could rush the western version of the game. novo Metal Gear for iPhone and Android.