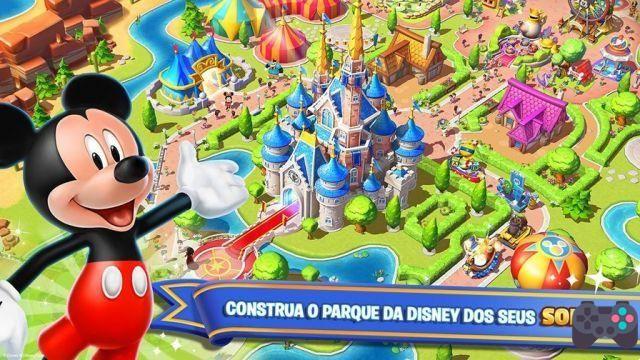 Disney's Magic Kingdom It is the most new game from Gameloft made in partnership with the Disney. With versions for Android, iOS e Windows Phone, the game takes players straight to the enchanted park. However, something very bad happened, Maleficent cast a spell that made the castle and all Disney magic disappear. With the help of Mickey and other characters, the player's mission is to recreate the entire Kingdom.

Right away, the game surprises with a beautiful look. In this regard, Gameloft did not let the shuttle fall and delivers a very beautiful game. The entire scenario is in 3D with animations that bring everything on screen to life. Disney's Magic Kingdom is all in Spanish with a great location. The sounds are very well put together, and the music is charming.

Newer building games aren't limited to just dropping players into a world of things to build. Disney's Magic Kingdom is no different. The game has a story and the characters talk all the time. Through the narrative, small quests are given that yield magic and crystals.

Yes, the game has a monetization system. So for unsuspecting parents, it is important to limit the purchase of items through Google Play, App Store and Microsoft Store. Another downside is the need for a constant internet connection.

For fans of all things Wall Disney creations, the game is highly recommended. Starting with the statue of the genius of animation and entrepreneurship positioned right at the entrance to the Kingdom. All the classic characters have an old look, but the game also features recent characters such as Toy Story, Wall-E and Tangled.

add a comment of Disney's Magic Kingdom is now available for download on Android, iOS and Windows Phone