With the end of August, mobile gamers can be proud, because the mobile platform was the stage for another month with great launches. Check out the best Android and iOS games of August 2021. 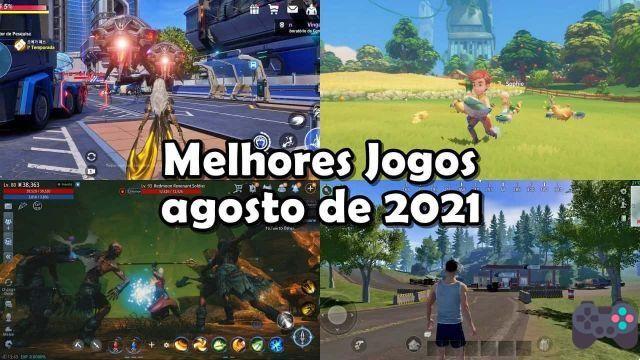 See the best mobile games released August 2021. This list is only made up of REAL games that have already been released. At the end of it, you can check the games that were (or are) in alpha, beta or pre-registration tests.

Marvel Future Revolution turned out to be one of the big surprises of 2021. This open-world action RPG draws attention for its graphics.

The gameplay can be a little repetitive, but the game delivers a plot with many non-interactive scenes. An eye candy and one of the best Online RPGs of 2021.

My Friend Peter: Ripe for Revenge

My Friend Pedro: Ripe for Revenge was released in August 2021 as a paid game. But after a lot of complaints about unresolved publicity, the studio decided to release the game for free.

In Ripe for Revenge, the player must help a banana get its kidnapped family back. Of course, this is going to involve a lot of gunplay in one of the most clueless games of 2021.

This survival game was the hottest on Android in August this year. The Haven Star is only available on the little green robot platform and delivers an adventure full of challenges and zombies.

The highlight of The Haven Star is the possibility to choose between playing alone or with friends. However, it is worth remembering that the game was released in tests still on mobile. The game's development appears to be at an early stage.

Rush Rally Origins is a remake of the first game in the franchise. With new graphics, but keeping the original gameplay, this Rally game brings arcade fun with realistic physics.


The game has 36 stages with challenges against other cars controlled by the game. An excellent offline game for Android and iOS.

My Time at Portia

Launched at the beginning of the month, My Time at Portia is the right stop for those looking for a Stardew Valley-style RPG and “farm” game, but want an experience with 3D graphics.

The game is exactly the same as on consoles and PC. A paid and offline game.

MIR4 is one of the most talked about MMORPGs today. The reason for this is that the game has a virtual cryptocurrency, the Draco Coin. Players can farm items and sell them to trade her. Then you can sell the coin on the crypto market and turn it into real money.

But when it comes to the game itself, MIR4 is an MMORPG with an oriental martial arts theme. The game is beautiful, but the gameplay can disappoint those who expected something less “automatic”. Fortunately, MIR4 is all in Spanish.

Northgard is a strategy game based on Norse mythology. Players will have access to 11 stages with challenges tailored to anyone who is a fan of good offline play.

This robot battle game was released globally in August. Mech Arena: Robot Showdown has online combat between players and each one can customize their mecha.

The game has commands to lead a team without having to speak and has a well-organized internal tournament system.

Anyone who is a fan of Durango and Last Day on Earth is always looking for a new survival game in this style, and here it is.

Lost in Blue is exactly what many fans of the genre have been waiting for. A game with many survival elements, good graphics and a nice story. All wrapped up in a free package. However, the game requires an Internet connection.

To close the month on a high note, we had the launch of Wall of Insanity. Launching an offline shooter is a rare thing on the mobile platform, so we need to celebrate.

The game is from the same producers as Mindcell and the Slaughter series. They are short games, but with good graphics and focus on gameplay. Typical good game of pick up and "zero" on mobile.

The month of August was a feast of pre-registration games, alpha and beta testing. Missed something? See all the games that were in testing over the past month.

Mega Man X DiVE was released in the US

The Lord of the Rings: Rise to War

Ragnarok Origin gains pre-registration on mobile phones, but Latin America is left out

add a comment of Best Mobile Games of August 2021