It's time to check out the best games for Android and iOS that were released in February de 2022.

So without further ado, let's get to the list. 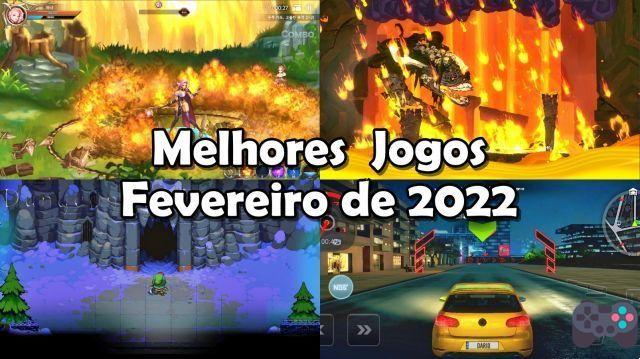 Micro RPG is a casual game for Android e iOS where you control a little hero on a simple journey. Your mission is to prevent enemies from getting any closer.

The game takes place in small arenas where you must tap the screen to attack. As you choose your weapon, you can attack further as well.

Very simple, but so cute. It's addictive.

heat gear scared the mobile gamer community with its resemblance to Need for Speed ​​Underground 2.

The racing game for Android is certainly one of the best free games of february 2022.

In this game, you face an open world with races and events in a city. On a much smaller scale than NFSU2, but worth the download, after all, it's free, and on top of that, offline.

Did you like the game? Also check out Street Racing.

But who really takes the trophy from best mobile game of february 2022 to Android and iOS é Bladed Fury.

This Hack'n Slash 2D is an action game with beautiful animations.

After being wrongly accused of her father's death, warrior Ji will fight various demons and also try to rescue her sister.

The plot is simple and what really draws attention is the excellent 2D gameplay.

The only “but” of the game is that it does not support bluetooth controls. Let's hope this is added later, because it's needed.

Anyone who enjoys the quirky art of Dragon's Crown, needs to know immediately DragonSpear-Ex.

Game2Gather's new mobile game is a beautiful tribute to the console game whose main highlight is its unique art.

DragonSpear-Ex is a beat'em up that looks like it was a free to play game that has been converted into a paid game.

We have the slight impression that we've seen this game somewhere, we never forget the face of a waifu.

This game has modes to play alone or with friends in co-op, and of course, it works offline, like any good premium game.

One of the best mobile games released in February 2022.

Puzzle Adventure is a casual 3D game where you have to solve puzzles.

The visuals are cute and the gameplay is simple and straightforward. The variety of puzzles is pretty good too.

A good mobile game to pass the time, whether in line at the bank or anywhere.


The only problem is the game's energy system. It was great at launch, but an update made everything very expensive and takes forever to load.

Siege: Apocalypse is a strategy game mixed with card game.

if you thought about Clash Royale, the game is more or less the same. But it is worth remembering that it is not exactly a copy.

The graphics are beautiful and the game has been well accepted by the community.

Look who's to say who"More serious and military-looking Clash Royale would work".

The game has campaign mode and 1v1 battles.

Tales of Dungeon is actually Dungeon X Dungeon, a mobile game released by PlayOne in 2018.

We can't tell if it was a case of "abandon-ware" or the developer who took their game back and released it on their own.

The case is that Tales of Dungeon arrived on Google Play in beta, with Spanish translation.

Reminiscent of the classics of the 16-bit era, Tales of Dungeon features pixelart graphics and 2D gameplay.

It's the typical sword hero game that jumps and hits enemies. It doesn't have much innovation, just the fact that it's a free game. it's worth the download.

The game is also offline.

Encodya is an enigmatic adventure with visuals cyberpunk which won a mobile version in February 2022.

But calm down, no comparisons with Cyberpunk 2077. The concept is much broader.

For example, in Encodya we are in Neo Berlin 2062.

A nine-year-old orphan and the robot SAM-53 live in this shadowy, megacorporation-controlled megalopolis.

Searching the trash and earning a living with scraps, these two characters will live a touching story - but not so much - since this game here suffers a little to say what it came for.

Don't take this the wrong way, but Encodya works with a type of storytelling that may not please many people. The game likes to subvert expectations.

Encodya looks interesting, but it had a disastrous launch on mobile. So much so that the Android version has been removed from Google Play. The game is only available on iOS.

Em Astral Light, the player must move the stars until they form constellations.

At first, we thought the game had something to do with astronomy, but that would be asking too much.

The constellations of Astral Light are quite unreal and represent the figures almost perfectly.

There are more than 300 challenges for those who enjoy outer space.

We think the game's proposal is great, but it would be really cool to also have some real constellations and some info about the cosmos.

Fans of The Legend of Zelda who enjoy a good puzzle need to know Dungeons of Dreadrock.

This cute Zelda-Like isn't exactly an action game. The movement happens in small turns and the combats too. For example, to attack you need to catch enemies off guard or dodge their attack to attack later.

The art of the game is very beautiful and it is quite extensive. There are more than 100 stages.

The game is free, but requires ads. There is only one built-in purchase, which is precisely to remove the ads.

But apart from that small “big” defect, what we have here is a remaster that respects the classic that originated on the Super Nintendo. The game even has an extra scene from Opera that at the time of the Super Nintendo was not included due to technical limitations.

Final Fantasy VI needs no introduction, a true milestone in the gaming world and a must-play for any JRPG fan.

And with that we close the account for the month of February. And did you know any cool games? I left a comment!