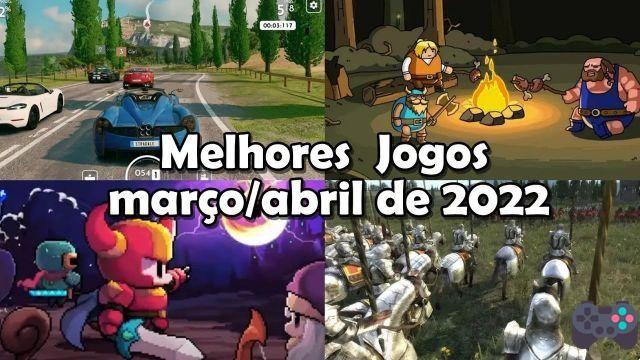 You know that feeling that you're forgetting something? Hey! Where are the best mobile games March and April?

Guys sorry for the delay.

Due to some personal issues, we had to postpone the best games of March. So we decided to join him with April.

Here is the place of best games released in 2022.

The purpose of this table is to show the games that really came out, which are already on Google Play and the App Store in Spain.

Maximus 2 was released in March and went completely unnoticed.

This beat'em up, oops, I mean “street fight”, is a great homage to games from the past like street of rage and golden axe. The uncles will remember these two games.

That's right, it's a free game guys. No mini-phases or gacha.

The game has a beginning, middle and end, and is an adventure with a lot of beating and swords.

There are 6 heroes to choose from and two difficulty modes.

The game is free, but it has ads that give bonuses and help those who are having more difficulty. But make no mistake, the ads and purchases of this game are optional, it is possible to finish it offline.

Ah, I miss when they made free games like this.

Another street fighting game, but wrapped in roguelite elements is Rhythm Fighter. A music game.

Originally released for Nintendo Switch and PC, Rhythm Fighter is a game where you control the rhythm of the beat with the touch of your fingers.

Tap and do the movements at the exact moment of the beat of the songs to perform blows and combos.

This one is recommended for anyone who lived through the Nintendo DS and PSP era, when there were a lot of music games on these portable consoles.

If you like a lot of music games, you can go for it.

Do you know Trackmania? this game here is it for smartphones.


A racing game with realistic graphics, but with the gameplay of a giant hot wheels.

That would be a good idea for a free-to-play game packed with in-app purchases, right? But Hot Lap League is not that!

This game is paid and has offline and online modes.

Developed by Ultimate studio with sponsorship from Supercell, Hot Lap League has around 150 tracks and many championships to compete in.

However, it may not please those who expected a “service” style game that had constant updates. If you're going to buy, expect a promotion.

Into the Dead 2: No way out

Into the Dead 2 isn't exactly a release, it's a Google Play version dedicated to Netflix subscribers.

Subtitled “No Exit”, this new version is offline and has no in-app purchases.

Despite looking like an endless runner, the game is divided into phases and has a backstory.

Divided into chapters, the story narrates the zombie apocalypse from the point of view of this father who is trying to find his family.

It is all in Spanish and does not require an internet connection. If you don't have a Netflix subscription, you can check out the 2017 version too, it's still available on Google Play and App Store.


The month of April was one of great news for game fans who own iPhone or iPad.

That's because Gear.Club Stradale arrived as an iOS platform exclusive.

The racing game invites players on a tour of Italian Tuscany.

The graphics are beautiful and the gameplay is a bit like Forza Horizon, a mix of realism and arcade.

The “plus” version of Sonic Dash was also released on Apple Arcade.

This was a practice that Google Play Pass could adopt. These versions with a “little more” on the side are identical to the free to play games, but with a difference, without in-built and offline purchases.

This Sonic Dash+ is a fixed “free” game, without abusive monetization and power limiters.

Apple Arcade is full of games like Asphat+ and JetPack Joyride+.

In April, one of the best strategy games of all time was released.

Total War Medieval 2 is an excellent game for those who like resource management and incredible battles with hundreds of soldiers.

Feral Interactive did a good job of adapting the complicated interface of the PC version to the mobile screen.

You start the game with 6 factions to choose from: England, France, Moors, The Holy Roman Empire, Spain and Venice. There are more factions to unlock.

The game is paid and offline and is a little heavy. You can set aside a minimum of 4GB there.

This one is another game that is not a game. PicoPico is an application that comes with several old games and abandonware from Nintendo 8 bits and MSX.

Created by the company D3Enterprise, the app is focused on nostalgia and has menu music composed by the legendary Yuzo Koshiro, composer responsible for the songs of Street of Rage.

See some of the games that are available in the app.

PicoPico has versions for Android and iOS and supports Bluetooth control. The only problem is that to play the complete catalog offline, you have to subscribe to the service.

Look who's back after many years.

The first The Impossible Game was very successful at the beginning of Spanish Youtube remember?

The game that made a lot of people angry, came back with more stages and renewed music.

This new version comes with offline and online modes, including a Battle Royale.

But here's the tip, be careful with this game, it will make you freak out and want to throw your cell phone at the wall!

The last game on our list is the super cute My Heroes: Dungeon Raid.

This mix of dungeon crawler and shoot'em up is ultra addictive.

It's the typical game you pick up to play and think, wow, it's already 3 in the morning.

The nice part is that it doesn't bother you with too many ads or in-app purchases. But unfortunately it requires internet connection.

And here ends our list. We know that a lot of games were released in early access, beta testing and etc, but the focus here is the global launch and, shall we say, end of each game.

You can let your favorite game that is in early access not appear yet, it will appear when it is released.

A big thank you to whoever made it this far. Seriously folks, really “thank you”. A big hug and until next time.

*DevilutionX was not released in March or April as we initially thought, this app that lets you play Diablo was released in November 2021.

Speaking of PC games that ended up on mobile.

DevilutionX isn't exactly a game, but it's worth mentioning here.

This is actually an application that makes Diablo 1 PC game fully playable on Android smartphone.

With very well adapted commands, the original interface was completely changed to fit in touch screens.

The curiosity is that this is not a remake or port, the game remains the original.

When you download this app, it comes with the demo version of Diablo 1.

Just copy the DIABDAT.MPQ file from the original Diablo PC or the GOG.com version to get the full game on Android.

The application is completely free, but to play the full game you must have the original.

The only thing missing now is the dev who did this, doing it with Diablo 2, it would be perfect!

Why ACA Neo Geo were left out of the best games

We will no longer place ACA Neo Geo games, as it is an initiative that does not add anything to the mobile platform. They're just taking out old versions and putting in new ones that have a big problem. Controls are not supported.

That's right. The old versions supported bluetooth or USB control and the new ones don't. Also it is not possible to customize the controls as in the old versions.

add a comment of Best Mobile Games 2022 – March and April