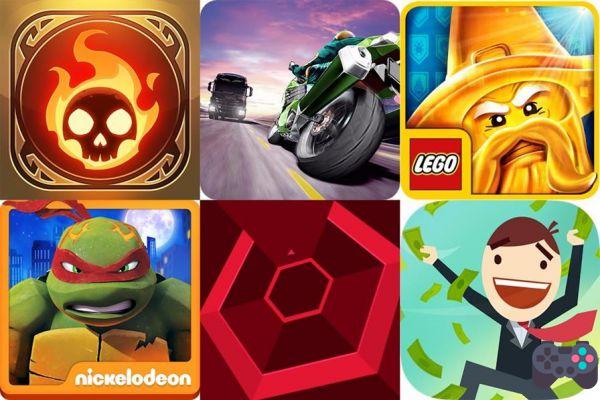 The year 2016 started with everything in iOS. As always, the Apple device is the center of mobile game releases, which are usually released later for other platforms such as Android and Windows Phone. The highlight was Traffic Rider, game where you pilot motorcycles in a totally realistic way. Check out the games of the week for iPhone, iPod Touch and iPad.

Driving games with traffic tend to be quite repetitive, but Traffic Rider is one of the most interesting games for having varied scenarios and a very impressive graphic realism. Practically a simulator of not riding a motorcycle. Drive on several different tracks, choosing between day and night and even in the rain. The game also draws a lot of attention for not having any kind of limiter.

Start the year with a pocket full of cash with Tap Tycoon. Tap the screen to rain money and spend your money on building new buildings and ventures. A very cool and relaxed game about entrepreneurship. But also, raining money like this is easy, right?

A mixture of RPG and action game, in Lego Nexo Knights, you must gather Clay's friends and collect all the powers that are scattered in different stages. The game is very well produced and even looks like preemium LEGO games like Batman Beyond Gotham. Based on the new LEGO animation that airs on Cartoon Network, Nexo Knights is one of the top games of the week for iPhone and iPad.


Battlehand is an RPG with turn-based combat. Participate in a great adventure, collecting cards and evolving your heroes to defeat the fearsome Queen. Battlehand stands out for its visuals and plot, with a good story and dialogue between characters.

TMNT Portal Power is an action game that features the most classic cartoon turtles, the Teenage Mutant Ninja Turtles. Join our heroes on an action-packed adventure with simple control. Warriors attack automatically, but you have to guide them through the scenario. The game has cellshading graphics and great dubbing, just like the cartoon, but unfortunately only in English.

– Super Hexagon (App of the week)

The app of the week, or rather the torture of the week is Super Hexagon. A paid game that is free for a limited time on the App Store. In this game, you are a small arrow and you need to dodge obstacles. The big problem is the mesmerizing visuals of the game, just try to get the highest score before getting your mind sucked into the game.