Know the best handheld video games of 2022. What games do they run? Which emulators? Where to buy and what cheapest? All this and much more.

I recently saw an article about portable consoles on a well-known site and found the content to be far from what I expected. In other words, they only recommended the national Nintendo Switch.

Not here! Get ready to check out a complete article, with everything there is to best in the laptop business right now. Which ones are worth buying and which ones are most powerful handheld consoles today. By the way, you will meet the best chinese laptops.

By the end of this article, you will understand how the general market for portable consoles is and understand what the best options are today.

Note: the article is organized in ascending order. From the cheapest and least powerful handheld console to the most expensive and most powerful. 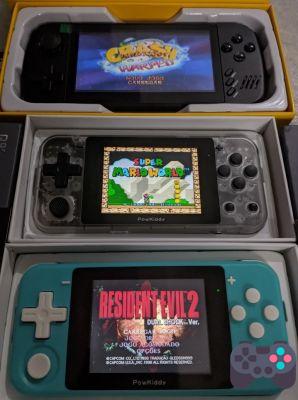 In the search for a companion for your smartphone, the Powkiddy X39 is a cheap solution for those who don't want to spend a lot.

The Powkiddy X39 portable console can emulate old systems like Atari, Mega Drive, Super Nintendo, everything and even PlayStation 1 (Nintendo 64 no!). It's a good console to give away, or to give yourself.

Or portable console Anbernic RG300 it's a slightly more expensive console, and less powerful than the X39, but it justifies its price thanks to its great construction.

The Anbernic RG 300 aims exactly at nostalgia by borrowing the look of the Game Boy Color, but with hardware capable of emulating other things as well. Despite being ideal for emulating Game Boy and Game Boy Advance, it can run many consoles with 2D games.

Enquanto or PowKiddy X39 is the ideal option for those who want to stay in 2D and only in pre-fifth generation console games, RGB10 and its variants are great options for emulate well up to PS1.

With a design very similar to the Nintendo Switch Lite, the PowKiddy RGB10 is an almost complete emulation station for those who enjoy older retro games.

Same hardware as the RGB10 Max, but with a smaller screen and more anatomical shape.

Still in the footprint of the Game Boy format, we have a Anbernic RG351Vwhich is the best handheld console made in Game Boy Color format.

Your hardware, screen, everything is made for perfectly emulate consoles up to the fifth generation (PS1 and N64).

For those who liked what the console offers, but did not like the format, a good alternative is the RG351P. The same hardware, but with a “landscape” format.

O Ambernic RG503 is a portable console that goes up another step on the emulation scale and can already satisfactorily run games like N64 and even Dreamcast and PSP (some games only).

In addition to the processing power, 5-inch screen and the larger format, it will appeal to people with big hands (like me). Being a good company for those who want to leave their smartphone in their pocket or backpack.

Note: From this price range, it is already good to consider a smartphone used with a GameSir controller (like the X2).

O Arbenic RG353P is a portable console in which we return to that smaller format with a 3.5 inch screen, but with more powerful hardware than the RG503. Its focus is to be an improved version of all previous consoles of the brand, but focusing on bringing better fidelity to the emulation.

The screen size, however, will be a drag for a lot of people. But as I said, the RG353P is a portable console in which Arbenic seeks to go back to its origins, focusing on emulation quality and pixel perfect.

The big star here is the dualboot system that allows, for example, to run games via Xcloud.

If you were happy with the possibility of using the Android system, know that there are a multitude of portable consoles with the Google system.

Among them, one of the best and cheapest options as a portable console is the Powkiddy X18S.

From notebooks with hardware like the X18S, you will see that the PSP emulation it is already possible without problems. The vast majority of games will run just fine, including heavier titles like God of War.

Now yes! Since we have surpassed the level of R$ 1 thousand, analyzing the purchase of a Nintendo Switch Lite starts to make sense. Especially if your goal is to enjoy Nintendo games or indie games that are released on this Handheld console.

Nintendo Switch is one of the best companions for your smartphone in portable game.

The Nintendo Console can be found on Aliexpress with prices ranging from R$1.100 to R$1.300 reais.

The price will depend on the dollar and promotions on Ali. However, at Amazon, the national model appears for BRL 1.460 reais.

Amazing games like The Legend of Zelda Breath of the Wild e Super Mario Odyssey can be played natively no console original.

A portable console that needs no introduction. Even after so long (the first was released in 2017), the Switch remains a benchmark in portable gameplay.

Alternatives: Nintendo Switch OLED in Spain can be a good alternative for those who want to play both outside and inside the house with the console connected to the TV or Monitor.

As the price range has already risen to the level of a standard Nintendo Switch, it is worth considering a second smartphone, or even your only cell phone, for game emulation.

This goes against the original idea of ​​this post, which is to give you tips for a second gaming device. But in the price range that we are going to suggest below, it might be better to buy a controller like the GameSir X3 and turn your main smartphone into a full emulation station.

Nowadays Android is capable of emulating several systems, including PS2 and Switch. However, it is good to remember that it is necessary to have a good smartphone with a processor, preferably, Snapdragon 855 onwards.

GameSir X3 was our choice, as depending on the system chosen for emulation, the cooler on the back can help the smartphone cool down and contain the heat. Mainly when using emulators like Dolphin, AetherSX2 e EGG NS.

From this point on, the portable consoles that we are going to indicate are very powerful, but at the same time they are too expensive, and this may not pay off for most users.

Instead of Android and Linux system, this laptop, as its name implies, comes with Windows 10 and SteamOS. Therefore, in addition to emulating old systems, it can run Windows games natively.

This notebook is new, but don't get too carried away with its marketing. Despite saying that it will run up to PS3, it can't emulate it all yet. Staying maxed out there in PS2 and Wii U emulation.

By the way, there is a criticism in the community about the fact that the notebook only uses a stick of 8 GB of RAM. Without dual channel, the console loses a lot of performance, as the video memory is integrated.

Behold, we have arrived at the consumer dream of anyone who wants a portable console, the Steam Deck.

A portable console for everyone to dominate.

Created by none other than Valve, the Steam Deck has its own system, the Steam OS, and is compatible with hundreds of games from the store that bears the same name. He can run incredibly heavy games like Death Stranding and Elden Ring.

The best option to buy is the one with NVMe SSD, as the eMMC option causes some texture loading problems in some heavy games. So if you're going to spend a fortune, spend it right.

And here we end our list, for now, of portables. I made the article in a bit of a hurry to post soon, but it will be updated soon with more portables and alternatives.

my thanks to john Baptist for helping me with this list.

add a comment of Best handheld video games of 2022