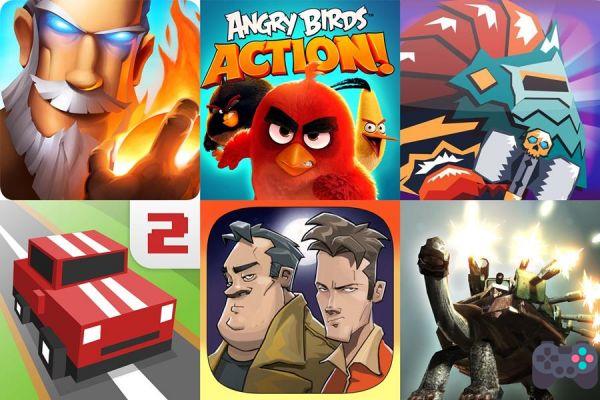 Check out the best releases that arrived last week on the App Store. Highlight for Dog Mendonça and War Tortoise, two very different games that drew attention for their proposal and gameplay.

Dog Mendonça and Pizza boy is an adventure game for iOS where narrative and charismatic characters are the focus of fun. The game released by Fishlabs is located in Spanish (from Portugal), the game is an adventure around two hours where we follow the adventures of two unusual investigators looking for monsters in Portugal. Although short, the “ticket” is worth it.

What was already good, just got even more fun. Loop Driver 2 arrives repeating the successful formula, but adding new elements. Now, there's a straight lane crossing the two intersections (get it?). The new game has roulette for prizes and different cars crossing the road. The gameplay is almost the same, but it's much harder to get high scores.

Undoubtedly one of the great releases of the week, Angry Birds Action is a casual game where the objective is to recover eggs and detonate the pigs. The game is based on the new movie that is coming soon and has a different and original gameplay. In the best pinball style, the birds bounce off the walls, destroying everything in the scene. The game is simple, but it has very cool features such as the possibility of interacting with the movie during the movie session.

How about going on a great adventure? But first you need to evolve your hero so that he can do the job. This is a game of a different genre, called “click game”. Where the objective is to keep tapping the screen to earn gold and exchange it for equipment, this is the main focus of the game.

In this different war game, you control armored and armed to the teeth turtles. The game has unbelievable graphics and has a very nice ambiance and audio. The gameplay is simple, just detonate everything in each scenario, but there are many stages and equipment for your turtle.

Spellbinders is a game produced by Kiloo (the same as Subway Surfers) that bets on the simplified card game style. In the game, you summon characters and place them in lanes to face other enemies. The commands are simple and there is the possibility of facing other players or just characters controlled by the game.