Best games of the week #2 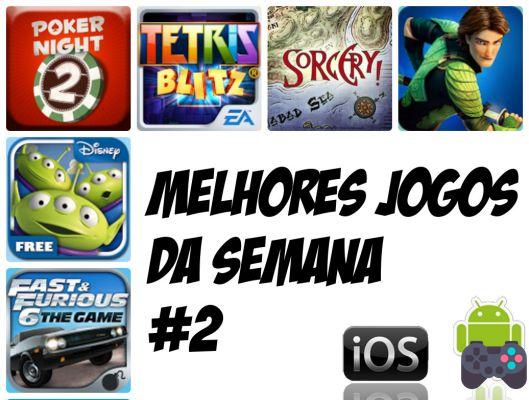 And we got to one more best games of the week, presenting all the good that appeared for Android e iOS. This week's highlights are the movies, cartoons and classic games of yesteryear. check out

Fast & Furious 6 has amazing graphics, but a gameplay that may not please many people, as the game is not a normal racing game. Focused more on races, the game has some car customization options, but that's all. The cool part is that the game is free, the bad part is that at some point you will need the money for a “10 second” car to proceed.

Hidden Kingdom is another Gameloft game in which you'll have to build a small village for the inhabitants of a movie. This time, the theme is the new movie from the creators of Ice Age and Rio. Enchanting Kingdom has its charm. The theme of building a kingdom has never combined so much and the game uses songs from the movie that are a bath of good taste. Gameloft could work better on this title, as the theme of the film perfectly matches this type of game.

Tetris Blitz is the remaster of a classic born on Nintendo 8bits and computers (well before those thousand in 1.. ok?). Games with the surname “Blitz” are characterized by quick disputes, in matches lasting less than one minute. Tetris Blitz has connectivity to social networks for you to challenge friends and finally find out who is the best at Tetris.

Link for Android and iOS.

Oh you think you're the savvy of mobile games then you must know Steve Jackson’s Sorcery, just one of, if not, the first Java mobile game in history. Based on a tabletop RPG game Sorcery celebrates its 30th birthday (the book, not the java game) and to celebrate the producer inkle has prepared an amazing game that simulates as if the player had the original book. The look and experience are unique, in a world where games are exactly, and only, what they present to us, a game where you must use your imagination deserves more than prominence.

Toy Story: Smash It! can be imagined with “Angry Birds in the third dimension. Disney's game with Toy Story characters is nice, well done and has a different gameplay. Using Buzz Lightyear, the player must demolish structures in order to score many points. The Free version gives you a taste of the paid game without getting too upset.

A crazy poker game with classic characters from games and movies. You have to be a true gamer and old-school geek to recognize Ash from the movie “One Crazy Night” and Sam from the game Sam & Max. The game simulates a pool night with several classic characters. Full of lines and really cool jokes, but the game is all in English.

add a comment of Best games of the week #2