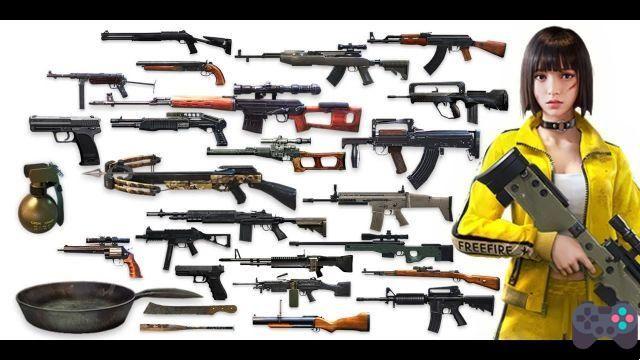 The latest update to Free Fire, released almost a week ago, has brought numerous updates and changes to the game.

In this article, you'll check out the main changes to the game's weapons, as well as check out the best free fire weapons in the current metagame.

Ready to find out what your new favorite weapon will be? So let's go!

The Free Fire September update brought new weapons that will be considered “stolen” by many players. The new weapons promise to break the current meta and make the game much more dynamic.

The treatment laser weapon is a weapon to heal allies with a similar use to the Treatment Rifle and the Treatment Pistol, however, with the ability to heal allies much faster. Its biggest difference is heal by going through walls and is ideal for supporting allies even across great distances.

Why is it the strongest? Garena buffed the plasma weapon and that weapon's fire rate jumped to 12%. When using the level 3 chip plasma weapon, it does very high damage and becomes an ideal weapon for medium and long range shots. The fact that it doesn't have a magazine and has unlimited shots makes it the best weapon in the game right now.


The Groza remains one of the best weapons in Free Fire, as it has the ability to “cover” with ease. Dispensing any skill on the part of the player. The fact that the weapon is only available in airdrop or for purchase in stores, makes it rare and rewarding for players looking to dominate the game.

The SCAR remains one of the most important and versatile weapons in the Free Fire meta. However, it is necessary to change the sense again. What's new for SCAR is that the weapon has attributes and with that it becomes one of the best weapons for Ranked mode.

It seems that Garena wants to make shotguns a different goal in Free Fire. In the last update, the Shotgun Butt received a buff and increased weapon accuracy, as well as reduced reload speed by 0,2. This left the weapon very strong both for the beginning of the matches and for the end. The big issue with the Bau Bau shotgun is its damage which is very high.