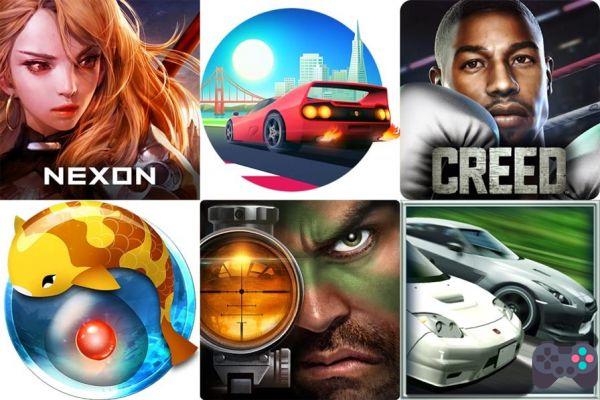 This was probably one of the best weeks for Android. Horizon Chase and HIT were released, without a doubt, two of the best games of 2015. As if that wasn't enough, we still had the releases of Creed and Kill Shoot Bravo, it's a lot of good game for just one week.

Horizon Chase is the essential racing game for anyone who grew up in the 90s. Whether you've played Top Gear or Out Run on the SNES or Mega Drive, the feeling of fun and nostalgia is indescribable. There are more than 70 races on tracks where the speed is insane. The game was created by a Spanish studio and had the participation of the composer of the songs from the original Top Gear. The game is free to test the first 5 races, and it costs R$ 12,50 to unlock the rest of the game.

Real Boxing 2 was released for Android and iOS as the official CREED movie game. The game features Apollo's son "Doctrinator" (Who remembers?) who will be trained by none other than Rocky Balboa. The graphics are sensational and the realism goes beyond the rings with training minigames and much more.


The South Korean online RPG Heroes of Incredible Tales (HIT), has arrived on the Play Store, but is still unavailable for download. However, just download the APK or download via VPN and the game works normally. It's even all in English. HIT is an action game with hack'n slash style gameplay. The graphics are amazing and the game has campaign mode and two VS modes, one 1vs1 and another 3vs3.


“Shrimp that sleeps, the wave takes it”, the popular saying can be applied to what happened this week with Gameloft. The company was going to release a sniper shooting game (Sniper Fury), however, it postponed the game at the last minute. The funniest thing is that another producer released an almost identical game. In Kill Shoot Bravo your mission is to kill terrorists in different parts of the world.

Drift Spirits is a racing game where you have to make perfect drifts to beat your opponents. Produced by Bandai Namco, the game is clearly inspired by the Initial D anime. The gameplay is purely casual, but the vibrant atmosphere with the first-rate graphics will captivate you. Ideal game to play anywhere.

Zen Koi is a different game where you'll have to take care of fish that live in a small region in the sea. Android game clearly inspired by Spore (PC, Java and iOS), Zen Koi stands out for its crafting system, where you need to mix items to create them. You can have a lot of fish, but you need to take care of them so they don't get sick or hurt the corals.