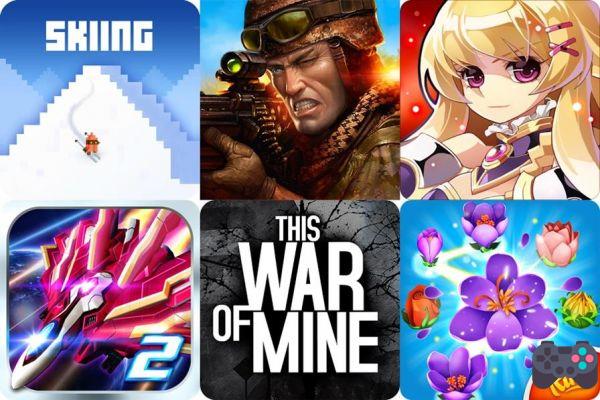 Welcome to another one of the best games for Android. This week, the highlights were casual games from well-known companies like King and Epic War. But if you like more elaborate games, our tip is This War of Mine. The survival game got an update and is now compatible with more tablet phones.

Blossom Blast Saga is another casual game by King. As soon as the game was released, it is already among the most downloaded of the week on Google Play. In this game, you have to match the same flowers to get the best score and go to the next stages. The way to play is different from Candy Crush, but the dynamics are the same: hundreds of stages and you have little energy to go through them all.

Mobile Strike is a strategy game based on resource management. The game is from the same producer of Game of War and does not deviate much from the standard of the popular Epic War classic. Prepare your base's defenses, create alliances and face war in yet another game where numbers are more important than graphics.

Fantasy War Tactics is one of the most surprising games of the week. Nexon has released a free game that reminds a lot of classic RPG and strategy games with fields in the shape of a board. With clear inspirations from Final Fantasy Tactics and Disgaea, Fantasy War Tactics has great graphics, simple gameplay and lots of missions. The amount of dialogue is a little irritating and the beginning of the game is ridiculously easy, but it gets better later on.

Lightning Fighter 2 is a spaceship game reminiscent of old arcade and Super Nintendo games. Face a barrage of enemies as you try to dodge colored bullets and launch powerful attacks. The game resembles unforgettable Cave classics, but stands out for being free to download and play.

The first paid game on our list is a different exploration game. In This War of Mine, you need to roam the surroundings and collect resources for your group to survive. All in Spanish, This War of Mine has excellent story and dialogue. Its unique gameplay reveals one of the best mobile releases of the year.


Link to download on Google Play – This War of Mine

This week's selection of the best Android games is concluded by Skiing Yet Mountain. Descend pixerated mountains in the company of skiers trying to escape the abominable snowman. The fun game is very reminiscent of a classic game for Windows 95.