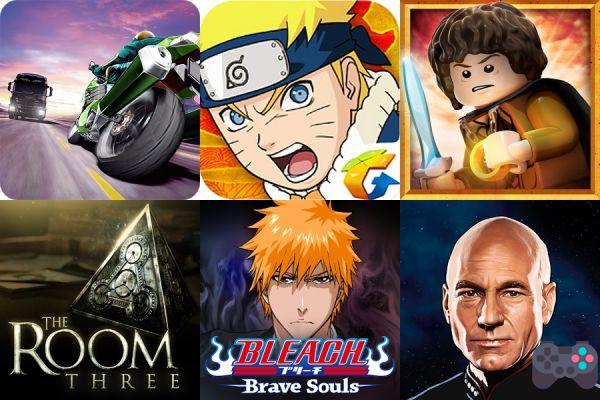 Check out the best releases of the week for Android. The past week has brought the long-awaited The Room 3 and a surprise, LEGO Lords of the Rings. There were many releases, check out our weekly top with the selection of the best games for your Android phone or tablet.

Definitely the most fun game of the week. Run on busy avenues, passing very close to cars very similar to those that exist here in Spain. The game's setting is totally immersive, thanks also to the very beautiful graphics. Traffic Rider is not a simple casual driving game. There are several stages with objectives to complete and different places to race on a motorcycle.

Bleach Brave Souls finally wins the long-awaited English version. In the game, the player follows the adventures of Ichigo and his friends. Totally based on the anime, the game is an RPG, but focuses on its gameplay and action. It gets quite boring at first, with lots of loading and short phases, but it gets better over time.

Another surprise release this second week of January was LEGO Lord of The Rings. The title took a while to arrive on Android, but it finally arrived and maintaining the same quality as iOS. In other words, a complete adventure with a friendly price, as it is priced below the original iOS release. The great thing about the game are the references to the Lord of the Rings saga.

From the movies, to the series. Trekkers need to play Star Trek Timelines. The game is an adventure that brings the classic characters from the first season and the "New Generation" in an adventure between multiverses. All in Spanish, the game is focused on the collection of these characters. The battles between ships are representative, the most important being the exploration of space, just like in the series.

As promised, on the 11th Fireproof games released the acclaimed The Room Three. Focusing much more on the unfolding of the plot, the player's mission is to find out who the Craftsman is, the person behind all the artifacts found. The game is a puzzle that maintains the essence of the previous games. Cutting-edge graphics, dark atmosphere, and great Spanish-speaking location.

Undoubtedly the hottest game of the week. The arrival of Naruto Mobile is cause for celebration for many fans of the blonde Ninja, even if it's to play a game only in Chinese. Yes, Naruto Mobile (let's call it that) is only available in Chinese, but there is no region restriction and you can download the game from the official Tecent Games website. Once downloaded, just confirm the data with WeChat and play. The game is a beat'em up with RPG elements. In addition to naruto it is possible to play with a large number of secondary characters.