All about Tower of Fantasy: requirements, release date and more

Tower of Fantasy, an open-world RPG spearheaded by Hotta Studio and Perfect World Games, which was sponsored and will be published globally by Tencent. The long-awaited game is close to being released on mobile phones and PC.

With scheduled release in 2022, the new game has been drawing a lot of attention and has even earned the nickname “Genshin Impac concurrentt ".

In this article, you'll learn all about Tower of Fantasy and what to expect from this exciting new open world game for mobile and PC.

What is Tower of Fantasy?

Tower of Fantasy is an open world action RPG in which players take on the role of two brothers.

The story of Tower of Fantasy takes place in the world of Aida. After consuming the planet's resources, the inhabitants of Aida build a tower capable of drawing cosmic energy from the universe.

Thanks to the tower, humanity, which was on the verge of extinction, managed to save itself. But the “children of Aida”, as the inhabitants of this world are known, exaggerate the use of technology and energy, creating several robots with their own intelligence and synthetic beings.

As a kind of divine punishment, the tower was destroyed and so humanity fell back into despair.

Players start playing as a male or female character of their choice. Two brothers, but that can be customized at will.

While Genshin Impact is set in a medieval fantasy world, Tower of Fantasy is an entirely cyberpunk/post-apocalyptic story.

Main features of the game:

How is the gameplay?

Tower of Fantasy has gameplay very similar to Genshin Impact, which consequently has gameplay inspired by The Legend of Zelda: Breath of the Wild.

The gameplay consists of advancing the story alternating moments of exploration, dialogues and non-interactive scenes that tell the story of the game.

Combat is action-packed with hack'n slash style commands. The camera is free and the player can move it at will.

Just like Genshin Impact is focused on single player or co-op.

But one of the great differentials of Tower of Fantasy is the PvP arena. Players can face off in 1v1 combat.

Main differences between Tower of Fantasy and Genshin Impact 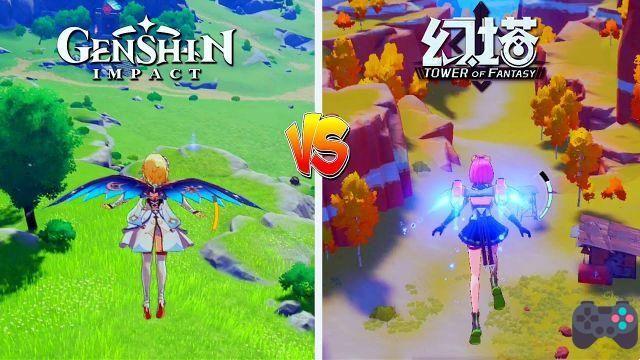 Since it first appeared in 2020, many players have been comparing Tower of Fantasy to Genshin Impact.

However, visual comparisons do not depict the similarities more than the differences between these two games.

Tower of Fantasy has two features that Genshin Impact fans have always wanted:

What platforms is it available for?

Tower of Fantasy has versions for Android, iOS and PC.

Developed in Unreal Engine 4, the game has impressive graphics. The look of the game can be adjusted on Android or iOS to be able to run on weaker smartphones.

What are the requirements to play Tower of Fantasy

How many GB is Tower of Fantasy?

Tower of Fantasy pesa 9 GB no Android. The version for Windows computers weighs around 16 GB.

When is the release of Tower of Fantasy?

Released in China late last year, Tower of Fantasy is set to be on the  August 10st, 2022. On August 9, it will be possible to pre-download the game.

add a comment of All about Tower of Fantasy: requirements, release date and more